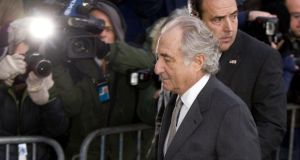 Five former aides of convicted fraudster Bernard Madoff used an “avalanche of lies” to help him carry out his decades-long Ponzi scheme, each with a specific role to ensure that investors, auditors and regulators were kept in the dark, a prosecutor said in the closing phase of their trial.

“Day after day, year after year, these defendants pulled off an avalanche of different lies that enabled Madoff Securities to steal billions of dollars from investors,” said Mr Zach.

Madoff’s worldwide fraud cost his clients an estimated $17 billion in principal losses. Madoff, who said he acted alone, was arrested in December 2008 and pleaded guilty in March 2009. He is serving a 150-year prison sentence.

The five former employees say they were duped by Madoff into believing his investment advisory business was legitimate. Their lawyers will deliver closing arguments after the prosecution.

The prosecutor discussed the specific allegations against each defendant in turn.

He focused his attention first on Mr Bonventre and Ms Bongiorno, two of the earliest employees at Bernard L. Madoff Investment Securities, who both chose to testify in their own defence during the trial.

Mr Bonventre was in charge of overseeing the firm’s general ledger, as well as the bank account that was the “beating heart” of the fraud, Mr Zach said, and siphoned money from the account to prop up the firm’s failing brokerage business.

His testimony that he had no idea Madoff was operating a fraud, simply cannot be credited, Mr Zach said.

Ms Bongiorno, meanwhile, did not deny that she registered thousands of backdated false trades in customer accounts. But she said on the witness stand she was only following orders from Madoff and did not realise there was anything wrong with it.

“To hear her tell it, she didn’t pay any attention to anything going on at Madoff Securities,” except for the millions of dollars going into her own investment accounts, Mr Zach said. “She was not testifying truthfully.”

He held up a box full of index cards that listed fake trades to be entered into accounts and told the jury that it was kept on her desk at the firm.

Mr Zach said that both aides profited handsomely from the fraud, with Mr Bonventre sending his son to private school and Ms Bongiorno purchasing a Bentley sedan, among other luxuries.