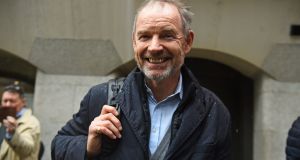 Richard Boath outside the Old Bailey after he and two other former Barclays senior executives, Roger Jenkins and Thomas Kalaris, were acquitted of fraud over an investment deal with Qatar at the height of the banking crisis. Photograph: PA Wire

The UK Serious Fraud Office has suffered a crushing defeat in its high-profile seven-year case against three former top executives at Barclays after they were all cleared of fraud charges relating to deals they made with Qatar during the financial crisis.

The three defendants – Roger Jenkins, Tom Kalaris and Richard Boath – were acquitted after a five-month retrial at London’s Old Bailey. It was the first criminal trial to examine steps senior bankers took during the financial crisis in the UK.

The jury took just over five hours to acquit Mr Jenkins, who managed Barclays’s relationship with Qatar and the Gulf state’s prime minister; Mr Kalaris, the American head of the bank’s wealth unit in 2008, and Mr Boath, its investment banking unit’s European co-head of financial institutions. The SFO had alleged the three had lied to the market in official documents detailing two emergency cash calls in 2008, which helped the bank avoid a taxpayer bailout by raising £11.2 billion (€13.1 billion). The men denied wrongdoing.

They stood in the dock with their heads bowed as the jury foreman read out the verdicts and exchanged glances and smiled after the verdicts were delivered.

Mr Kalaris and Mr Jenkins left court quickly after the verdicts. Mr Boath addressed the media briefly outside the Old Bailey and said he was very surprised the SFO had brought the case after he had already been cleared of wrongdoing in respect of the fundraising by the financial regulator.

“I’m delighted and relieved with this verdict, having been cleared by the FCA in July 2017. The SFO case was an invention and should never have been brought,” he said.

He added that the past six years had been “tough.” “There are ups and downs and today is a big up.”

Mr Jenkins later said in a statement: “I am very grateful that the jury, who sat through five months of evidence and speeches, concluded, what I have known to be true all along, that I did nothing wrong twelve years ago in 2008.”

The acquittals follow that of John Varley, Barclays’s chief executive in 2008, who was cleared by a judge during an earlier trial last year, after he ruled that the SFO failed to produce sufficient evidence against him. Fraud charges against Barclays as a corporate defendant were scrubbed even before trial.

The verdicts deal a significant blow to the SFO, which has spent about £15 million on its flagship prosecution, even before legal fees from two five-month trials and numerous pre-trial hearings are taken into account.

The charges – carrying a 10-year-maximum sentence – turned on a so-called advisory services agreement, or ASA, signed with Qatar at the time of the June fundraising, and extended in October. The original ASA, signed by Mr Varley, was just six paragraphs long and had the amount handwritten.

The SFO alleged that the ASA was a dishonest mechanism to pay the hard-bargaining Qataris the outsize fees they demanded for investing.

However, the defendants maintained the side deals were genuine, signed off by lawyers, and designed to help expand Barclays’s Middle Eastern business and get valuable banking business from gas-rich Qatar.

The trial lifted the lid on the febrile atmosphere as markets roiled in 2008 and Barclays did everything possible to avoid government control.

The SFO attempted to use sometimes-lurid conversations between the men – heard to speak about not wanting to go to jail or “get rumbled” – as evidence that the men knew what they were doing was wrong.

In one call, Mr Kalaris, dubbed the “quarterback” to get the capital raisings over the line, told Mr Boath: “None of us wants to go to jail here ... The food sucks and the sex is worse.”

The SFO said in a statement: “Our prosecution decisions are always based on the evidence that is available, and we are determined to bring perpetrators of serious financial crime to justice. Wherever our evidential and public interest tests are met, we will always endeavour to bring this before a court.”

Lawyers for Sheikh Hamad bin Jassim Al-Thani said in a statement that the SFO’s case against the defendants “included the incorrect claim” that the service agreements were not genuine. “The Qatari parties always anticipated that the retrial would show this claim to be untrue and they are of course pleased that this has happened and that the true position has now been made entirely clear.”

BA in union talks to suspend around 32,000 staff - source 08:36
Coronavirus: putting numbers on what this means for the economy 08:17
Intempo Glitter Ball speaker: Light up your home disco party 08:06
AIB offers SMEs breathing space on fees 08:04
O’Brien may cede 49% of Digicel empire under debt write-down plan 07:37