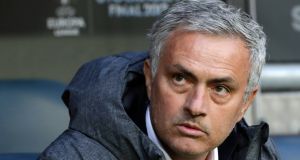 Manchester United manager Jose Mourinho: Public prosecutors believe he failed to declare earnings worth more than €7 million during the years 2011 and 2012, on which he should have paid €3.3 million in taxes. Photograph: Michael Sohn/AP

Spanish prosecutors have accused José Mourinho of defrauding tax authorities there of €3.3 million, after finding that the Portuguese coach used a company in the British Virgin Islands to conceal earnings from the sale of his image rights.

The alleged use of Irish companies has also featured in several Spanish tax investigations into other football stars, including Real Madrid’s Cristiano Ronaldo and Fabio Coentrao and Monaco’s Radamel Falcao.

The accusations against Mr Mourinho, currently the manager of Manchester United, date back to his time as coach at Real Madrid. Public prosecutors believe that the 54-year-old failed to declare earnings worth more than €7 million during the years 2011 and 2012, on which he should have paid €3.3 million in taxes.

According to a statement from prosecutors on Tuesday, Mr Mourinho did so “with the aim of obtaining an illicit gain” and after setting up a deliberately “opaque” company structure to manage the earnings from his image rights.

As of Tuesday afternoon Mr Mourinho had not responded to the allegations. The Dublin branch of Moore Stephens says it works to “the highest professional standards ensuring compliance” with all laws.

In both cases, tax authorities and prosecutors allege that Mr Mourinho and Mr Ronaldo ceded their image rights to BVI companies which in turn ceded them to Dublin companies Multisports & Image Management and Polaris Sports.

Corporate sponsors would make payments due to the stars to the Dublin companies, who would then send the cash on to the BVI.

Andy Quinn, the managing partner of the Irish branch of Moore Stephens, is a director of both companies.

Both Mr Ronaldo and Mr Mourinho are long-time clients of Jorge Mendes, a well-known Portuguese football agent. When the allegations of tax fraud first surfaced in the media last year, Mr Mendes’s agency issued a statement insisting that both men were “up to date with [their] tax obligations”.

Mr Mourinho is one of the most celebrated football coaches of recent times, winning the Champions League trophy with both FC Porto from Portugal and Italy’s Inter Milan. He also secured league titles with Porto and Inter, as well as with Real Madrid and English side Chelsea.

Known for his confrontational demeanour with referees and journalists, Mr Mourinho famously referred to himself as a “special one” when he took over as Chelsea coach in 2004. The moniker has followed him ever since.

He returned to the London club in 2013, winning another league title in 2015 but left after a disappointing final season. He was hired by Manchester United in 2016, coaching them to victory in the League Cup, and they also won the Europa League in Stockholm last month.

1 Why gift a son now if it eats into his tax-free inheritance threshold?
2 Flights abroad ban could last all summer
3 Can we finally say farewell to the scourge of hot-desking?
4 Mortgage arrears: Prevention is definitely better than cure
5 Ballymore acquires London shopping centre for €83m
6 Big Four told to outline plans for audit split in UK by October
7 All parties to High Court hearings told to wear facemasks
8 Dispute over €2.95m sale of Georgian property struck out
9 Chris Johns: Economic self-harm is the root of populism
10 Deloitte was top Irish dealmaker in first half of this year
Real news has value SUBSCRIBE