Irish life insurance company acquired for up to €240m

Combined group will manage about €24 billion in assets 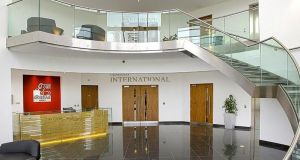 Generali PanEurope’s office in Navan. The company has been acquired by an Isle of Man-based group.

A Navan-based life insurance company has been acquired by an Isle of Man company for up to €240 million.

Italian insurance group Generali has sold its Generali PanEurope operation, which has operated in Ireland since 1999, for an initial consideration of €230 million and an additional €10 million to be paid 12 months after the deal has closed.

The agreement to sell to Utmost Wealth Solutions, a subsidiary of Life Company Consolidation Group, will ultimately be worth around €286 million after Generali receives settlements for existing intercompany financing arrangements.

LCCG will combine Generali PanEurope’s operation with its own business and that company will be renamed Utmost PanEurope.

A spokesman for the company told The Irish Times that Generali’s 140 staff in Ireland would not be affected by the acquisition.

As a result of the acquisition, the combined businesses would have in excess of €24 billion of client assets with “significant operations” in Ireland and the Isle of Man.

“We are proud of our performance in Ireland over the last 20 years and have grown into one of the largest international companies in Ireland with assets under management of over €10 billion,” Paul Gillett, the chief executive of Generali PanEurope, said.

LCCG group chief executive Paul Thompson said the acquisition was a “highly complementary one” which would make the combined group a “formidable force in the European market for specialist cross border wealth management solutions”.

Utmost’s total policyholder assets are about €13 billion while its parent company, LCCG, manages about $100 billion (€84.58 billion).