The average rate charged on new mortgages in Ireland was 2.79% in November, compared to a euro area average of 1.31% 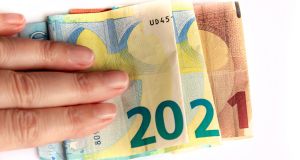 Irish home-buyers are still paying more than their European counterparts for basic mortgage products, according to latest Central Bank data.

The average rate charged on new mortgages here was 2.79 per cent in November compared to a euro area average of 1.31 per cent.

Critics say the premium levied on Irish borrowers is evidence of a lack of competition in the mortgage market.

The figures show the volume of new mortgage agreements amounted to €822 million in November, an increase of 10 per cent on the previous month and 1 per cent on November the previous year. This reflects the rebound in activity seen since the earlier part of the pandemic.

Fixed-rate mortgages, including renegotiations, accounted for 80 per cent of all new agreements in the three months to November, compared to 84 per cent in the euro area.

The ultra-low interest rate environment has, however, resulted in some lenders pricing fixed-rate loans lower than variable ones. Fixed rates are usually higher than variable rates, the premium reflecting the certainty the borrower is guaranteed.

Trevor Grant, chairman of the Association of Irish Mortgage Advisors, said: “There are a number of reasons as to why mortgage rates in Ireland are more expensive than in other European countries, but there is clearly scope for further reductions. However, the good news is that the rates offered to new mortgage applicants continue to drop, with PTSB being the latest to introduce new rates this week.”

Mr Grant also noted that the arrival of Avant Money before Christmas into the mortgage broker market has driven increased competition, which was good news for consumers.

“Another positive trend in the market is that the deals that lenders are offering to mortgage-switchers are improving all the time, with most lenders now willing to cover much or all of the costs involved,” he said.

“There have been a number of reports on 0 per cent rate mortgages being offered in Denmark, but it’s important for Irish consumers to realise that these Danish mortgages are subject to some fees and charges and are not literally free.

“In addition, repossessions proceed far quicker in Denmark than in Ireland, where protection for the consumer is far stronger.”

Mr Grant said the mortgage market in 2021 was likely to grow, with a large percentage of potential house-purchasers working in the tech, pharma or financial services industries unaffected by Covid.