Insurance sector reform to be implemented over next year 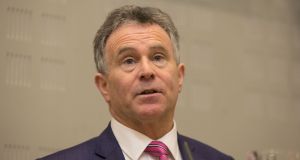 Minister of State Seán Fleming who has responsibility for the insurance sector within the Department of Finance.

Wide-ranging plans to reform the insurance sector, including new guidelines for awards, should be implemented within the next 12 months, Minister of State Seán Fleming has said.

Mr Fleming, who has responsibility for the insurance sector within the Department of Finance, was speaking to business owners in the capital as part of a Dublin Chamber political event.

He said the Government’s 66-point plan, which will see the book of quantum replaced with new personal injury award guidelines, should be implemented over the course of the next 12 months.

“Our plan is to have practically well over 90 per cent of that plan implemented within the next 12 months,” he said. “Some of the key issues include replacing the book of quantum with new guidelines to be adopted by the Judicial Council.

“We might have that in the next week or so, but at a minimum we would have it during the course of the summer. We have a legislative date set for July by which time we must get that report from the Judicial Council at the very latest.”

The plan contains actions designed to bring down costs and reduce the pressure on businesses already affected by the Covid-19 pandemic.

As part of the reform plans, Ministers have agreed to replace the book of quantum with new guidelines on the “appropriate” level of personal injury awards.

They also agreed to enhance the role of the Personal Injuries Assessment Board and to place perjury on a statutory footing, making the offence easier to prosecute.

Mr Fleming said the reforms would also seek to redress the balance of responsibility between businesses and members of the public when personal injury claims are made.

“We’re looking at some aspects in relation to the duty of care to strengthen waivers and notices and increase protection for consumers,” he said.

“So many people can have slips and trips as they call them and injuries in your premises, and it is important that the legislation is balanced and that people have a duty of care to look where they’re going and mind what they’re doing.

“We can’t have a situation where it is always 100 per cent the business owner’s fault, so we have to strengthen that issue.

“There is an assumption if somebody gets a raw egg and they were looking for a fried egg, they should get compensation for that, or if they’re not looking where they’re going and they fall over a table, it’s always somebody else’s fault.

We want a duty of care – people have some duty to mind themselves, and I think once that is enshrined in legislation we will see a fairer balance and make it easier for people to run businesses.”