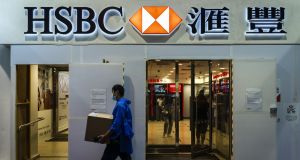 HSBC Holdings’ earnings beat estimates in the fourth quarter as the lender kept costs in check and signalled bigger investments to drive its pivot to faster-growing Asian markets.

Weighed down by loan losses, adjusted pre-tax profit slid 50 per cent to $2.2 billion (€1.8 billion) in the period, ahead of a $1.8 billion estimate, the London-based bank said on Tuesday.

HSBC will resume paying a dividend of 15 US cents a share after British regulators relaxed a ban intended to preserve capital last year after the coronavirus outbreak. HSBC rose 4.6 per cent to 48.65 Hong Kong dollars (€5.16) as of 1.02pm Tuesday in Hong Kong.

HSBC chief executive Noel Quinn said in a statement that the bank had a “solid financial performance in the context of the pandemic – particularly in Asia”, which lays “firm foundations for our future growth”.

Sticking to cost-cutting plans that will reduce its workforce by about 35,000, HSBC is pushing through one of the banking industry’s most radical responses to the pandemic.

Europe’s largest bank is shifting billions of dollars to beef up operations across Asia, seeking to become a market leader in wealth management by targeting a rapidly expanding affluent population in the region.

The bank on Tuesday outlined plans to invest about $6 billion in Asia, targeting wealth, commercial banking and markets to drive “double-digit growth in profit”. It singled out markets in southeast Asia, such as Singapore, as well as China and Hong Kong.

Expected credit losses last year hit $8.8 billion, as expected at the low end of a previously announced range of $8 billion to $13 billion. It now expects them to be materially lower this year.

The bank stuck to a target of getting its cost base down to $31 billion or less in 2022 as well as a $100 billion reduction in gross risk-weighted assets. It doesn’t expect to reach a return on average tangible equity target of between 10 per cent and 12 per cent in 2022, but will now target a return of 10 per cent or above in the medium term.

The focus on other markets in Asia outside Hong Kong and China involves more than economics. China’s crackdown on Hong Kong has increasingly forced HSBC to accept criticism in the US and UK as a cost of doing business.

Mr Quinn was summoned to testify to British lawmakers this month over the lender’s decision to close the accounts of an exiled Hong Kong democracy activist.

The bank divulged little news on its plans for Europe and the US. HSBC said it was in talks on selling its French retail bank and is likely to post a loss on any divestment. It is exploring “strategic options” for its US retail franchise and wants to focus on high-net worth clients.

HSBC has one of the largest US businesses of any non-American bank, partly a result of its ill-fated acquisition of Household International in 2003, the subprime lender that ended up costing the company billions of dollars in writedowns.