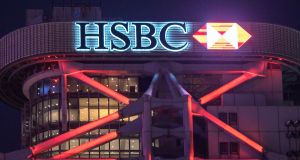 London-listed shares of HSBC, which are down 12 per cent over the past six months, fell 4.3 per cent in early trading. I

The interim chief executive of HSBC has announced plans to “remodel” large parts of the bank as the lender reported a 24 per cent decline in third-quarter net profit and abandoned its main financial target.

Noel Quinn said returns in some parts of the business, chiefly in Europe and the US, “were still well below acceptable levels”.

“We have to remodel and reshape those businesses, because the revenue outlook is much softer,” Mr Quinn said in an interview. “In addition, we need to look at HSBC overall to remove complexity, giving us greater ability to execute at pace. That will lead to a lower cost base.”

Mr Quinn became interim chief executive in August following the abrupt ousting of John Flint, who had lost the confidence of the bank’s board of directors.

It was reported this month that Mr Quinn had embarked on a plan to cut costs and divest some businesses, threatening up to 10,000 jobs. HSBC employs about 237,000 people.

Mr Quinn said he had been working on a new plan for HSBC “for a few weeks”, which involves reducing the amount of capital allocated to low-returning parts of the bank in Europe and the US.

HSBC generated 93.6 per cent of its pre-tax profits in Asia during the third quarter, but has $426 billion (€383.5 billion)) of assets adjusted for risk – about 50 per cent of the total - allocated to Europe and the US.

Mr Quinn declined to give details of the restructuring plan, which will be unveiled at or before the bank’s fourth-quarter results announcement in February, but warned it “could take up to two years” to complete the turnaround.

Separately, Mr Quinn said he wanted to attack the group’s cost base, which he said had been “designed to deal with the set of circumstances that existed post-financial crisis”. Specifically, he noted the bank had completed “significant work” to beef up its compliance controls after 2012, when HSBC was fined $1.9 billion for breaching sanctions and helping Mexican drug cartels launder money.

“What I’m looking to do is simplify the bank and reduce the costs associated with running the group,” he added. “We have to look at how many layers we have and look at some of the silos.”

HSBC warned the restructuring could force it to take a string of impairment charges to cover redundancy payouts that will weigh on its profitability. However, it said it intended to keep its dividend and maintain its core equity tier 1 ratio - a key measure of balance sheet strength - at above 14 per cent.

The bank abandoned its main profitability target - to generate a return on tangible equity of more than 11 per cent next year - blaming a “challenging” environment.

Ian Gordon, a banks analyst at Investec, said: “The outlook statement warns of softer revenues and ‘significant charges’ in the fourth quarter and beyond. [A] savage restructuring beckons.”

London-listed shares of HSBC, which are down 12 per cent over the past six months, fell 4.3 per cent in early trading.

Mr Quinn is the only internal candidate to replace Mr Flint, according to people briefed on the succession process, although the bank is also considering external contenders.

Asked whether he expected to be given the job on a permanent basis so he can implement his plan, Mr Quinn replied: “That’s a decision for the board, but I’m operating on the assumption I’ll be giving [the fourth quarter] update [in February ].”

The Asia-focused lender reported third-quarter net profit had fallen 24 per cent to $2.97 billion, about 14 per cent below analysts’ forecasts. Revenues fell 3.2 per cent to $13.35 billion, undershooting analyst expectations by 3 per cent.

Profits were crimped by hyperinflation in Argentina and the cost of reimbursing UK customers who were mis-sold payment protection insurance, while revenues at its global banking and markets (GBM) division – which banks large corporations - fell 23 per cent compared with last year.

The bank’s traders, which are housed within the GBM unit, had a disappointing quarter, with revenues in fixed-income and equities trading down 22 per cent and 26 per cent, respectively. However, Mr Quinn said the business in Asia had performed well during the first nine months of the year.

One large investor said they expected staff within the GBM division in Europe and the US to bear the brunt of the forthcoming job cuts.

The bank posted a return on tangible equity of 6.4 per cent for the third quarter, versus 10.9 per cent a year ago. This was well below analyst forecasts of 9.5 per cent.

Despite fears that the escalating protests in Hong Kong, where HSBC was the biggest lender, would hurt the bank, it said it had put in a “resilient performance” in the region.

However, it signalled that it expected the demonstrations to hit its business in the future and increased the amount of money it sets aside to cover loan defaults by 74 per cent to $883 million, including a $90 million “charge to reflect the economic outlook in Hong Kong”. – Copyright The Financial Times Limited 2019

1 ‘Life in Vilnius reminds me of Ireland in the 1990s’
2 The ‘gangster’ superior, the Irish priest and the wealthy widow
3 Real price of cheap credit? Unaffordable homes
4 Dublin housebuilder records €11m gain after striking deal with bankers
5 Qualcomm shares soar on surprise legal settlement with Apple
6 Boeing identifies new software flaw in grounded 737 Max
7 The Irish economy is thriving but if you’re not feeling it – here’s why
8 Teeling ‘disappointed’ at planning refusal in Louth for whiskey warehouses
9 How a new electric car could save you money
10 Ten of the most mysterious aircraft disappearances
Real news has value SUBSCRIBE