HSBC board rethinks overhaul and seeks even deeper cuts

Bank’s board is pressing executives to come up with even more radical changes, including further cuts or even a possible sale of its US business alongside its retail network in France 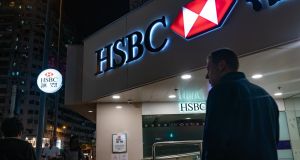 Pedestrians walk past an HSBC Holdings Plc bank branch at night in Hong Kong in 2019. HSBC’s board is said to be pressing for deeper cuts than those announced in February. Photograph: Anthony Kwan/Bloomberg

HSBC’s board is set to deepen the biggest restructuring in the bank’s 155-year history after deciding that the coronavirus crisis requires more drastic measures.

In February, Europe’s largest lender said it would slash 35,000 jobs, $4.5 billion (€4.1 billion) in costs and $100 billion of risk-weighted assets by radically shrinking its US and European businesses and investment bank. Executives plan to redirect resources to Asia, HSBC’s historical heartland and profit centre.

The pandemic - which HSBC fears could saddle it with $11 billion of bad loans this year alone - caused management to pause lay-offs.

But the board is now pressing executives to restart the restructuring and come up with even more radical changes, including further cuts or even a possible sale of its US business alongside its retail network in France and operations in smaller non-strategic countries.

Some of the more marginal businesses that were previously given the benefit of the doubt are being re-examined, say senior figures at the bank.

One person familiar with the discussions said the board wants a new strategic plan “sooner rather than later”, but that it will be several months before the review is completed.

The bank’s US business is under particular scrutiny, where HSBC has a small east-coast retail network alongside trading and transaction banking operations. These were shrunk by almost a third in February, but management is now debating whether the US operation is viable at all.

A US sale “is possible, but it’s very early in terms of making that decision”, the person said. “What HSBC needs to understand is, for better or worse, their opportunity is in China. ”

“We have to have a business there [THE US], there’s no question of that, but the shape we’ve got to look at again,” said another person involved in setting strategy.

US profits fell 39 per cent last year and it made a return on tangible equity - a measure of profitability - of just 1.5 per cent. That compares with a 15.8 per cent return in Asia and 12 per cent in the Middle East.

“We’ve been saying for a decade that HSBC should get out of US retail,” said Ronit Ghose, an analyst at Citi, adding that the bank could service US corporate clients “in Asia and internationally without a subscale American retail franchise”.

The bank’s retail network in France, with more than 200 branches and 4,000 staff, is also being evaluated and the bank has invited bids from other banks and from private equity firms.

Executives are also revisiting a long list of small, non-strategic countries including Malta, Bermuda, the Philippines and New Zealand to see if any of those divisions can be sold or closed. Previous efforts to sell were hampered by a lack of buyers acceptable to local regulators, one of the people said.

Mark Tucker, the bank’s chairman and a tough former insurance executive who joined in October 2017, is the key protagonist. He fired John Flint as chief executive within 18 months for not being decisive enough, replacing him with Noel Quinn, an HSBC lifer.

Mr Tucker wants the board to be “more assertive and more engaged”, believing that in the past it has been “too passive”, a person familiar with his approach said.

Investors were underwhelmed when the current strategy was unveiled on February 18 - its stock fell 6 per cent on the day.

Coronavirus has added to the scepticism. HSBC shares now trade at their lowest in more than a decade and retail investors in Hong Kong were furious when the Bank of England forced the bank to cancel its dividend for the first time in 74 years.

Covid-19’s early toll was revealed in HSBC’s first-quarter results. Profits fell by half after the bank boosted reserves against potential bad debts fivefold to $3 billion. Mr Quinn warned provisions could hit $11 billion by the end of the year in the worst-case scenario.

HSBC’s economic forecasts are among the most pessimistic of any global bank.

“We’ve got to look at where we want to be in five years’ time and get ourselves in position, not incrementally, but top down,” said one executive. “We have a fundamental reorganisation to do and we’ve delayed this, as a corporation, for 12 years.”

1 If tourists are such pariahs should we not be testing them on arrival?
2 ‘My rent here is so low it’s a joke’
3 Varadkar and Donohoe to meet banks to discuss mortgage breaks
4 Belgium helps Ireland to a Brexit boon
5 Can Grafton Street stop the flood of closures?
6 WeWork on track for profits in 2021, says chairman
7 What is Covid Tracker Ireland?
8 Irish Rail losses up slightly despite record passenger numbers
9 This charming man: how Paschal Donohoe won the Eurogroup presidency
10 British pound sinking to ‘emerging market currency’ status
Real news has value SUBSCRIBE