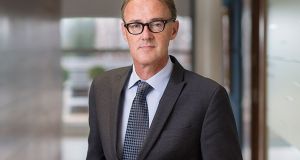 Goodbody Stockbrokers’ planned €155 million takeover by Bank of China has fallen through, with the Beijing-based bank citing uncertainty caused by Covid-19 as it backed away.

It marks the second collapse of a Chinese deal in less than 18 months.

It is understood that there had been a level of frustration among parties involved in the deal that there was no sign of when Chinese regulators planned to make their decision on the transaction, which was originally supposed to be completed by the end of last month.

“Bank of China has now informed Goodbody that, due to the unprecedented global impacts and uncertainty caused by Covid-19, it is not in a position to complete its proposed acquisition of Goodbody at this time. As a result the proposed transaction has been terminated,” Goodbody said in a statement on Friday afternoon, confirming an earlier Irish Times report on the deal’s collapse.

The company said that it “retains significant financial capacity to drive its growth strategy forward”, with its balance sheet having been boosted by the sale of its stake in the Irish Stock Exchange (ISE) in 2018.

The company received about €45 million of cash for its almost 27 per cent ISE stake as pan-European bourse operator Euronext bought the Dublin exchange from a group of Irish brokerages.

Bank of China agreed last November to acquire the 144-year-old firm in a transaction that was to see Kerry-based financial services group Fexco sell its 51 per cent stake in a business it acquired control of from AIB in 2011.

Management and staff at Goodbody, who own 49 per cent of the business, were to get half of their consideration when the Chinese transaction was completed, with the remainder due within three years.

A previous agreement struck in 2018 for a Chinese consortium, led by Zhong Ze Culture Investment Holdings, to take over Goodbody fell through early last year when the sellers became concerned about the changes to the make-up of the group following an initial agreement.

Goodbody managing director Roy Barrett told staff in a briefing last month that the finalisation of the Bank of China deal was taking a bit longer than expected. However, he dismissed speculation at the time that the deal might not proceed, saying there were decent levels of engagement between both sides and that there has been no effort by the Chinese to renegotiate the terms of the deal despite the economic turmoil caused by Covid-19 since the transaction was agreed last year.

The Central Bank approved the planned takeover in March.

Separately, Mr Barrett sent an e-mail to clients on Friday afternoon saying that Fexco “continues to support the business”, and that Goodbody and Bank of China would “nevertheless explore avenues for mutually beneficial collaboration and business development”.

The breakdown of the Chinese transaction is likely to reignite speculation of other potential suitors. Davy, the largest securities firm in the State, and Irish Life were also on a shortlist of bidders circling Goodbody last year before Bank of China was selected.