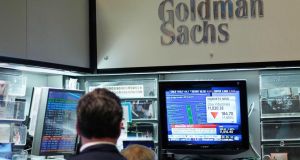 
The British Inland Revenue unlawfully agreed a deal with Goldman Sachs nearly three years ago which let bankers escape paying up to £20 million in interest charges on a tax bill imposed on bonuses, the High Court in London has been told.

The unusual case has been taken by campaigning group UK Uncut, which questions the deal made in November 2010 between HM Revenue and Customs and Goldman Sachs International, which is chaired by Ireland’s former European commissioner, Peter Sutherland.

Under the deal, Goldman Sachs paid tax due on bonuses that had been given to London-based staff without national insurance contribution deductions, but escaped paying interest on the tax outstanding even though it had warned about the practice in 2005.


Mistakes made
Revenue and Customs accepts that mistakes were made in the negotiations, particularly since a top Revenue advisory group was opposed to it, but justified it on the basis that Goldman Sachs had a reasonable expectation that it had made a binding deal.

The 2010 deal was reached on the same day that chancellor of the exchequer George Osborne announced a bankers’ tax avoidance code and was partly prompted by HMRC’s top official David Harnett’s fears that Goldman Sachs would reject the code if an agreement was not reached.

“The exact amount of money lost as a result of the failure to claim interest is not known. HMRC has admitted that the failure [to charge interest] has led to a loss to the National Insurance Fund of at least £5 million to £8 million. However, the [House of Commons’] Public Accounts Committee has received evidence that the true figure may be up to £20 million,” said UK Uncut’s barrister, Ingrid Simler QC, adding that Goldman Sachs had been rewarded for “several years of failing to pay” taxes.