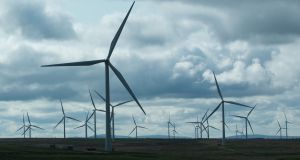 General Electric plans to buy a maker of wind-turbine blades for $1.65 billion (€1.5 billion), bolstering the renewable-energy business amid growing demand for clean power.

The deal for Denmark-based LM Wind Power will enhance GE’s ability to serve customers in the onshore and offshore wind markets, the companies said on Tuesday in a statement. LM Wind Power, which is owned by private-equity firm Doughty Hanson, will run as a standalone business within the renewable-energy unit.

“It shows GE’s true commitment to the wind industry,” Jerome Pecresse, chief executive officer of GE Renewable Energy, said in an interview. The deal marks the latest in a string of acquisitions for the Boston-based company and accelerates growth in its wind power business.

GE is rushing to meet global demand for clean energy sources as falling costs make renewable power more competitive with fossil fuels. The company, which also has a sizable hydropower business, is one of the world’s leading manufacturers of onshore wind turbines and is trying to build out a complementary offshore operation.

GE is supplying equipment this year for the Block Island project in Rhode Island, the first offshore wind farm in the US. “GE is clearly willing to grow in offshore,” Mr Pecresse said.

LM Wind Power, the largest blade supplier to GE’s wind business, started as a furniture maker in the 1940s before transitioning to glass-fibre manufacturing in the next decade. It started producing turbine parts in 1978 and has since made more than 185,000 blades.The European company has 13 factories on four continents.