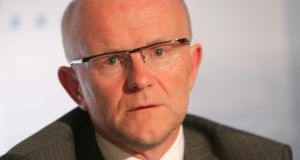 Fintan Drury will tell the committee Anglo’s board acted appropriately when it learned of the large stake Seán Quinn had built in the institution up to 2008. File photograph: Frank Miller/The Irish Times

The board of Anglo Irish Bank told the financial regulator about Seán Quinn’s large shareholding in the institution as soon as it became aware of it, the Oireachtas banking inquiry is to hear on Thursday.

Former non-executive director of Anglo Fintan Drury will tell the committee the bank’s board acted appropriately when it learned of the large stake Mr Quinn had built in the institution up to 2008.

Mr Drury will insist he and other directors informed the financial regulator once the position became clear.

It emerged in 2008 that Mr Quinn had built a large stake in Anglo through the purchase of shares via Contracts For Difference.

Mr Drury is to tell the committee Anglo failed to meet basic practices and standards and that was a source of regret.

The former director of the bank is expected to say he and the board had complete faith in the regulatory system and its powers of supervision were sufficient and robust to oversee the system.

In a written statement, Mr Drumm has contradicted evidence by Mr Cowen given to the inquiry about whether banking issues were discussed at the function. Mr Drury was at the dinner and will be questioned by members about his version of events. However, it cannot reference Mr Drumm’s correspondence after a late intervention by the Director of Public Prosecutions.

The DPP contacted the inquiry raising concerns about publishing the statement fearing it might prejudice possible criminal proceedings.

The inquiry on Wednesday accepted the direction of the DPP and agreed not to publish his statement. However it said it would seek further advice from its own legal team on the matter.

Ms Harney said “reckless lending like you wouldn’t imagine” had caused the crash and the blame for the downturn lay initially with the banks.

Mr Gormley said the cabinet was assured the issues were ones of liquidity.

1 Majority of employees don’t want to return to pre-Covid working patterns
2 Investors in Irish solar energy fund in line for €20m payout
3 If tourists are such pariahs should we not be testing them on arrival?
4 Norwegian airline sued in Dublin by inflight caterer
5 ‘I set up an investment club many years ago with a bunch of friends’
6 ‘My rent here is so low it’s a joke’
7 Tobacco giant’s menthol-ban substitutes take 5% share of Irish market
8 Homeworking is depriving me of juicy gossip
9 Varadkar and Donohoe to meet banks to discuss mortgage breaks
10 Government should set a benchmark for any permanent increases in spending
Real news has value SUBSCRIBE