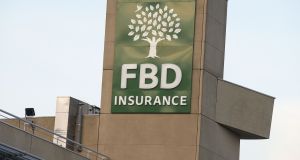 FBD is likely to more than double to €70 million its provision for payouts to publicans after it lost a landmark Covid-19 business interruption test case earlier this month, according to Goodbody Stockbrokers.

The insurer, which reports financial results for 2020 on Friday, set aside €30 million in the first half of last year to deal with the potential outcome of the test case, taken by four pub companies. However, the ultimate cost of payouts, which includes those borne by reinsurance companies that have taken on some of the risk, will be much higher than the charge taken to date by FBD.

FBD is seen by analysts posting a full-year net loss, implying no dividend for shareholders for the year. However, Goodbody analyst Eamonn Hughes said that he will be looking out for commentary on the €35 million dividend that was ringfenced for 2019 but had been postponed due to uncertainty surrounding the business interruption case.

FBD has already started making contact to owners of the more than 1,000 pubs affected by the High Court ruling earlier this month in order to make interim payments ahead of final clarity on the quantum of losses that will be covered.

“The market will be looking for some additional colour from the company on the latest state of play in relation to the [business interruption] court case where discussions are ongoing on costs and with the reinsurers,” Mr Hughes said.

“We will also be interested in underlying claims trends as the lockdown continues, if the insurer is seeing any benefits in the key farm account after the negotiated Brexit deal and a view on the ongoing legislative drive for lower claims costs, particularly amongst personal customers.”

The analyst said it was a little too soon to expect the group’s new chief executive, Tomás O Midheach, who took over the helm last month, to offer an update on overall strategy as the results are released.