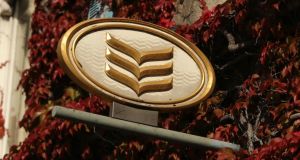 Fairfax Financial plans to sell almost 3 per cent of Bank of Ireland.

Fairfax Financial plans to sell almost 3 per cent of Bank of Ireland according to reports late on Monday.

The investment group, founded by billionaire Prem Watsa, was one of a group of north American buyers that took a 35 per cent combined stake in the Irish lender in 2011, keeping it out of majority State ownership.

Just after the stock markets closed on Monday, it emerged that it plans to sell 935 million of its shares in the bank, netting it a €266 million profit on the basis of their closing price.

Fairfax paid around 10 cent a-share for its stake. Bank of Ireland shares closed at 38.4 cent in Dublin on Monday.

Deutsche Bank will place the shares with investors for Fairfax. The shares amount to a 2.9 per cent stake in the bank.