Dublin among locations to benefit as banks plan London exit 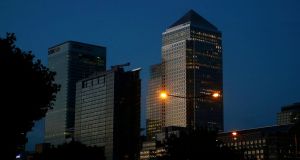 Banks have already begun to take action to shift operations out of the UK, but most of their staff will have to wait several months to find out how many thousands of them will be asked to move to fledgling financial hotspots including Dublin, Paris, and Frankfurt.

Investment banks, who donated heavily to the Remain campaign, have reacted immediately to Britain’s referendum result, with some of London’s largest institutions approaching regulators to secure licences and lining up executives to relocate.

The big US banks - JPMorgan Chase, Goldman Sachs, Bank of America, Citigroup and Morgan Stanley - have large operations employing tens of thousands of people in the UK. They have historically set up their regulated businesses in Britain and then used its right to “passport” into the rest of the 28-member bloc.

But lawyers are warning that after Brexit, they would likely need a new legal home base, so they are preparing to shift at least some work to cities such as Dublin, Paris and Frankfurt.

UK banks were also re-evaluating what to do with their businesses that trade EU - as opposed to UK - securities, because many analysts assume that clearing of those products will move to the continent.

HSBC said before the vote that it could move as many as 1,000 trading jobs to Paris in the event of a Leave. But because the bank already has a Paris office, it could defer any decision until right before the UK’s exit comes into effect.

The danger to the UK’s financial services sector was highlighted by François Villeroy de Galhau, France’s central bank governor, who warned that banks would lose “passporting” rights to operate in the EU if Britain leaves the single market.

The UK could try to adopt the path followed by Norway, which is a member of the European Economic Area but not the EU. But that has drawbacks: it requires Britain to implement all of the EU’s rules without having a say in writing them.

And Jonathan Hill, the Briton who resigned at the weekend as EU’s commissioner for financial services, told the Financial Times that he was not sure an arrangement would work. “Most approaches that offer access come with free movement of people and I can’t see that flying given the weight of immigration as an issue in the referendum debate,” he said.

The US banks, therefore, are already preparing for the contingency that the right to sell financial products and services from Britain to EU clients could be partially or entirely abolished.

“We’ll get on with it,” said a senior executive at one large US bank. “We’ve started to think about how we put people in our existing offices and entities in Europe. We are already rebalancing our footprint.”

“Some stuff will move quickly - we’ll travel at the pace of the slowest link,” said the executive. “Regulatory approvals and permissions can take time - we will look ahead at all the circumstances and ask what do we need to continue to serve our clients.”

Damian Carolan of Allen & Overy said it would typically take banks 2-3 months to put a licence application together. They would then have to wait for about six months for approval for an investment bank or brokerage, or nine months for a retail bank.

But he warned that those timetables could be extended, saying: “That’s in normal times . . . In these times, you will have a number of onshore regulators getting numerous questions.”

Many of the US banks have been quietly bulking up European entities outside the UK, allowing them to transfer some activities quite quickly. But most of them still lack sufficient licences to carry out many of the operations they at present run out of London.

“If you don’t have a [full EU] licence [outside the UK] then you need to start work right away,” said the head of investment banking at a large group.

Jamie Dimon, JPMorgan chief executive, warned before the referendum that as many as 4,000 jobs could be shifted out of the UK. But investment bank boss Daniel Pinto - whose unit employs most of JPMorgan’s 16,000 staff in Britain - told the FT that the US group hoped to keep most of its UK investment bank intact. The bank would “need to figure out a way to deal with” some specific products and services, such as global custody and corporate deposits, but he said any moves would be gradual.

“We will not start moving people until we have clarity on what we will be allowed to do from the UK once the negotiations [on the terms of the country’s exit from the EU] start to take shape,” he said.

Jonathan Lewis, head of Japan’s Nomura International, which employs about 2,600 staff in London, said it would have to “wait and see” how things unfolded before making any big decisions about its locations or operating structures.

But his base case was that the UK would be left at a disadvantage. “I don’t see how anyone can say with any certainty that passporting will continue. Switzerland doesn’t have passporting, neither does the US, so we cannot assume we will,” he said.

Morgan Stanley had previously warned that 1,000 of its London jobs could move in the event of a Leave vote, but on Friday categorically denied a report that it had already decided 2,000 workers were being moved to either Dublin or Frankfurt.