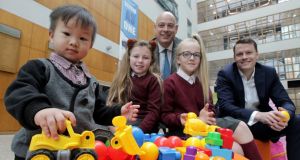 Basis.point chairman Clive Bellows (centre) noted that communities in the shadow of the IFSC were among the most disadvantaged in the State.

Kennedy Wilson, the US property investor, has teamed up with Basis.point, the Irish funds industry charity initiative on a €100,000 pledge to support new child development initiatives for underprivileged communities in Dublin’s north inner city.

The money will help fund two initiatives over five years. One is the National College of Ireland’s (NCI) early-learning scheme for families living in temporary accommodation, called Home from Home. The other is Archways, an after-school mentor programme for children between the ages of 10 and 13 who have talent in academics, art, sport or music.

Jason Byers, who is the property investor’s head of residential in Ireland, said the two programmes would have a “tangible impact on the fundamental early years of local children’s education”.

“Kennedy Wilson’s large presence in Dublin’s north docks makes this commitment to supporting the local community with meaningful initiatives all the more relevant,” he said, adding that a number of its staff would be volunteering directly with the programmes next year.

Clive Bellows, chairman of Basis.point, noted that communities in the shadow of the International Financial Services Centre were among the most disadvantaged in the State and face enormous challenges in their day-to-day lives.

“We hope that with early intervention we can help break the cycle of disadvantage,” he said.

1 Basic income for all: Has the Covid crisis given us a new economic model?
2 Only way is up for Stripe as valuation skyrockets
3 Admission of mistake in Oxford vaccine dose raises doubts over reliability
4 ‘I don’t need to do any of this. . .I don’t actually need to work.’
5 Direct sea routes to Europe offer certainty in choppy Brexit waters
6 When the levees break: consumers pay nine levies
7 Why Lehman Brothers was allowed to fail
8 Brexit stumbling blocks persist as Barnier travels to London
9 White knights or loan book cannibals – what will happen at Ulster Bank?
10 How long can Government afford to keep State pension age at 66?
Real news has value SUBSCRIBE