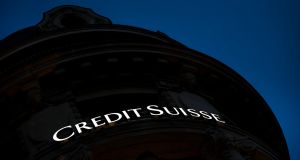 Credit Suisse said on Monday that it had increased its shareholding in Credit Suisse Founder Securities from 33.3 per cent to 51 per cent. Photograph: Valentin Flauraud/Bloomberg

Credit Suisse has taken a majority stake in its Chinese securities joint venture, granting it control for the first time over its business with the troubled Founder Group conglomerate.

The Swiss bank joins a handful of other financial institutions taking advantage of an expedited opening of China’s financial markets, after years of slow, frustrating developments.

Under pressure from the United States to allow more foreign participation in domestic investment banking, asset management and insurance, China’s regulators have sped up reforms over the past two and a half years.

Since then, UBS, Nomura, JPMorgan, Goldman Sachs and Morgan Stanley have secured majority stakes in Chinese securities joint ventures, or the regulatory permission to do so.

“Janice is one of the most experienced China bankers in the industry and has been with Credit Suisse for almost two decades,” the bank said in a statement.

Monday’s announcement marks a major milestone for the Swiss bank in its expansion in China.

The joint venture with Founder Securities was originally struck in 2008. Since then Credit Suisse has not controlled the company’s operations at the unit.

By taking control of the business, Credit Suisse can chart out its own strategy and choose its own clients. In the domestic market for sponsoring and underwriting initial public offerings and corporate bonds, it will face stiff competition from Goldman Sachs and UBS, which have in practice controlled their JVs for more than a decade.

The deal for control will also distance CSFS operations from the chaotic default and legal battle playing out at Founder Group, a once powerful state-owned conglomerate linked with Peking University, one of China’s most-prestigious schools.

Last year, Peking University launched a lawsuit against former Founder Group executives, claiming that a privatisation and sale of shares in 2004 was paid for with Founder money, indicating a pilfering of state assets.

In early 2020, Founder defaulted on its onshore debt in February and was sucked into a rare bankruptcy case for a high-profile state group. Administrators from China’s central bank and other government entities have worked to restructure its debt load of about $26 billion (€23.3 billion).

Goldman Sachs struck the first Sino-foreign securities joint venture in 2004 with Chinese financier Fang Fenglei. A number of other western banks followed that move and the model has become the most common platform for accessing China’s investment banking market.

1 Why are markets booming when a crash is on the way?
2 How much do Irish people earn? And what will Covid-19 do to our wages?
3 Drumcondra credit union collapses as merger plan fails
4 Permission sought for €150m film and media campus in Wicklow
5 Dunnes Stores trials online ordering from Cornelscourt outlet
6 Could your old car be giving away all your secrets to its new owner?
7 Coronavirus vaccine hopes and positive US jobs figures boost markets
8 Aryzta needs to sell €600m of assets to reset business, shareholders claim
9 Sales at Penneys and Primark fell 75% during lockdown
10 Government’s budget deficit balloons to €5.3bn on back of Covid spending
Real news has value SUBSCRIBE