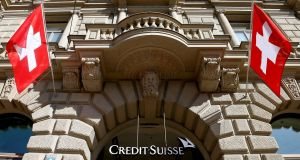 António Horta-Osório will become the first non-Swiss national chairman in Credit Suisse’s history, and will move to Switzerland.

Credit Suisse has appointed António Horta-Osório as its next chairman, picking the outgoing chief executive of Lloyds Bank to help steer the lender through the fallout from the coronavirus crisis.

Mr Horta-Osório will start at Credit Suisse (CS) at the end of April, the bank said on Tuesday.

The Swiss lender had been on the hunt for a new chairman after Urs Rohner, who has been in the post for nearly 12 years, privately sounded out shareholders about staying for another term but ended up leading the search process for his successor.

The Portuguese banker was discussed as a candidate from the beginning of the process, according to a senior figure at Credit Suisse, despite his lack of experience in wealth management and investment banking, in which the lender specialises.

“In a way, not having those backgrounds is helpful considering the history of CS,” the person said. “That is where some of the troubles have been and he can look with clear eyes.

“He will have to build the focus on Asia, sort out the investment banking strategy, work out what to do with asset management and put spying behind us. He will be chairman of a big global banking machine.”

Former chief executive Tidjane Thiam was forced out of Credit Suisse in February in the wake of an embarrassing corporate spying scandal at the group.

The appointment comes just four months after Credit Suisse launched a restructuring plan under new chief executive Thomas Gottstein, who replaced Tidjane Thiam. The changes are designed to cut costs and are expected to save SFr400 million (€370 million) a year by 2022.

Credit Suisse said in October it would renew dividend payments and launch a share buyback scheme. Shareholders voted in favour of the plan last week. Mr Gottstein said that the bank had “proven the strength of our diversified business”.

Alongside the appointment of Mr Horta-Osório, Credit Suisse said on Tuesday that it was facing $680 million (€567 million) in potential losses from a civil suit in the US because of residential mortgage-backed securities issued in 2007. It has already taken a $300 million provision for the fine and said it had strong grounds for appeal.

The announcement of Mr Horta-Osório as chairman comes a day after Lloyds said it had chosen HSBC’s Charlie Nunn as its next chief executive. This year, Lloyds had said that Mr Horta-Osório would leave the UK bank in 2021.

The 56-year-old has led Lloyds since 2011, steering the bank through the aftermath of the financial crisis, returning it to profitability and the private sector after it was bailed out by the government in 2008.

Mr Horta-Osório has a “good reputation in the market”, analysts at Vontobel noted, pointing out that his background is “primarily related to retail and commercial” banking.

One potential candidate mentioned frequently in the Swiss press was Philipp Hildebrand, former head of the Swiss central bank and now vice-chairman at BlackRock. But people briefed on the process said he was not considered a frontrunner.

Lloyds said on Monday that Mr Horta-Osório would step down at the end of April and that chief financial officer William Chalmers would temporarily take on the role of chief executive if Mr Nunn had not joined by then.

Mr Horta-Osório will become the first non-Swiss national chairman in Credit Suisse’s history, and will move to Switzerland. Though he does not speak German, he is fluent in French and Italian, Switzerland’s two other primary languages.

In a week of leadership reshuffling across European banking, UniCredit, the Italian lender, disclosed on Monday night that its chief executive, Jean Pierre Mustier, was leaving the group after falling out with board members over the bank’s strategy. – Copyright The Financial Times Limited 2020