Central Bank bonuses for 30 staff amount to 21% of salaries

Government examining whether ‘retention payments’ paid to managers are legal 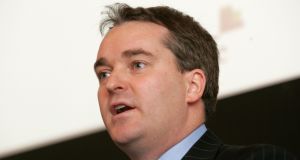 Government officials are examining whether “retention payments” given to fewer than 30 middle managers at the institution, which regulates the Republic’s financial services industry, are legal, following complaints from trade unionists.

The bonuses are costing the bank a total of €501,530, an average of almost €17,000 for each of the staff involved, but it has emerged that some of them will receive payments of €20,000. Those figures exceed the 21 per cent of their salaries paid to the staff.

When it confirmed that it was paying the bonuses this week, the Central Bank said that the payments came to 21 per cent of the workers’ gross salaries.

The institution denies that they are bonuses and instead describes them as “retention payments” that are meant as an incentive to a number of staff in two departments to remain working for the bank.

It says that it faces challenges in attracting and keeping staff in certain areas, as it is competing with the private sector, which can offer more generous pay and benefits to workers.

The bank said yesterday that the staff receiving the bonuses were working on a number of “critical projects”.

However, a spokeswoman said that it could not say what those projects were, as this could potentially identify the staff involved.

While the bank won’t identify the departments in which the workers are employed, an International Monetary Fund document from last May highlights the fact that there is a high turnover in the department responsible for supervising insurance.

“The remuneration package offered by Central Bank of Ireland to experienced staff or staff with specialist expertise such as actuaries is uncompetitive compared with the market,” the fund’s report notes.

Department of Public Spending and Reform secretary general Robert Watt told TDs during the week that his officials will examine whether the bonus scheme breaches the terms of that legislation.

Meanwhile, Colm Quinlan, regional organiser with Unite, the trade union that represents staff at the Central Bank, says the bonus payments will be raised at a general meeting of the organisation next week.

Mr Quinlan pointed out that his members agreed to pay cuts at the height of the financial crisis that cut €10 million a year from the bank’s payroll costs. Those staff have yet to have those reductions restored.

The union is not ruling out demanding that that money be returned to workers.