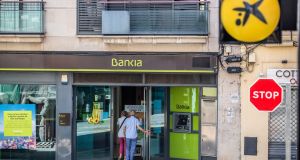 Bankia’s shares were trading at a steep discount to its book value before the merger was announced.

CaixaBank is set to become Spain’s largest lender after agreeing to pay a 20 per cent premium to take over smaller rival Bankia, in a move that heralds long-awaited consolidation in the country’s banking sector.

The two groups said on Friday they had agreed terms to create a bank with more than €650 billion in assets and a combined market capitalisation of almost €17 billion, as the coronavirus pandemic exacerbates pressure on lenders to join forces in pursuit of scale.

“Getting married in difficult times makes it even more important that you choose the right partner,” said CaixaBank chief executive Gonzalo Gortázar. “This is the best transaction we could do.”

A combined group, which would continue to operate under the CaixaBank name, would become Spain’s largest lender by market share in domestic loans and deposits, although it would not have the extensive overseas operations of Santander and BBVA.

The two companies said they expected to make at least €770 million annual cost savings by 2023, and hoped to add about €290 million in annual revenues, largely by extending CaixaBank’s existing insurance business to Bankia’s customer base.

Mr Gortázar acknowledged that “it’s a bit more difficult to give credit to institutions that merge for revenue synergies”, but insisted “they’re not a myth”.

Benjie Creelan-Sandford, analyst at Jefferies, said the terms of the deal and its new targets appeared “broadly credible and imply value creation for both sets of shareholders”.

Bankia played a prominent role in Spain’s financial crisis, coming close to collapse only two years after it was formed through a disastrous merger of seven regional savings banks. The Spanish government was forced to seek EU aid to help fund a €22.4 billion bailout in 2012.

CaixaBank, a lender with strong Catalan roots that is now officially based in Valencia, agreed to exchange 0.6845 newly issued shares for each share in the state-controlled bank. The deal would reduce the Spanish government’s stake from 62 per cent to 16 per cent, but it would receive a seat on the board of the combined group.

The La Caixa Foundation, one of Europe’s biggest charities, would remain CaixaBank’s largest shareholder with 30 per cent of the group compared with its current 40 per cent stake.

They said on Friday that the joint merger plan would be submitted for approval to the two banks’ shareholders’ meetings, likely to be held in November 2020, and that it should be completed in the first quarter of next year pending regulatory approval.

Mr Goirigolzarri said he was “reasonably confident” that the deal would not face major competition hurdles, pointing out that its market share of about 25 per cent was comparable to market leaders such as Lloyds Banking Group in the UK and France’s Crédit Agricole

. However, analysts have previously suggested regulators might have concerns about its dominant position in some regions such as the Balearic Islands and Madrid, where the enlarged group would have more than 40 per cent market share.

Mr Goirigolzarri made clear his interest in consolidation in an interview with the Financial Times in 2018. But the impetus for Spanish banks to combine has increased over the past year because of the impact on income of the European Central Bank’s ultra-loose monetary policy and the fallout of the coronavirus pandemic, which has hit the Spanish economy particularly hard.

Shares in the two banks were little moved on Friday morning, with CaixaBank rising 0.1 per cent and Bankia slipping 1 per cent in early trading. However, the two stocks had already jumped substantially since the merger talks were confirmed earlier this month.

While the merger has been broadly welcomed by investors, some analysts have questioned whether the terms represent a good deal for Bankia’s minority shareholders given the bank’s stronger capital position. Bankia had previously promised investors substantial dividend payouts that were put on hold by the ECB at the start of the pandemic.

Bankia’s shares were trading at a steep discount to its book value before the merger was announced, and Mr Goirigolzarri said “the market clearly has reduced the premium” provided by its excess capital. As a result, he said “it was very important to deploy this excess, and the best way we thought is to invest our capital in this merger”. – Copyright The Financial Times Limited 2020

1 Ryanair and Eir the worst for customer service during Covid crisis
2 Fair deal? Family at odds with hospital and each other not so sure
3 ‘Essential’ retailers risk a firestorm if they exploit the closure of the ‘non-essential’
4 What to consider if older person or loved one needs care at home
5 Glenveagh attracts growing hedge-fund interest
6 PlanNet21 eyes further acquisitions after buying rival eCom
7 INM inspectors write to former directors in ‘inside information’ inquiry
8 Level 5 restrictions risk pushing economy into double-dip recession
9 Tinnitus group Neuromod raises €10.5m for expansion
10 Streaming services set for Christmas battle after drama-filled year
Real news has value SUBSCRIBE