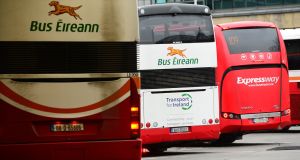 Bus Éireann buses in Busáras, Dublin. The company faces losing up to €125,000 per day in State funding if a planned all-out strike by staff goes ahead. Photograph: Dara Mac Dónaill/The Irish Times

Bus Éireann faces losing up to €125,000 per day in State funding if a planned all-out strike by unions at the company goes ahead later this month.

On Friday, the group of unions representing the 2,600 staff at the State-owned transport company on Friday served formal notice of an all-out indefinite strike from February 20th.

The strike will go ahead if management moves to unilaterally implement a radical survival plan involving major cuts to staff earnings, which it has been examining in an attempt to improve its precarious financial position.

Bus Éireann’s acting chief executive Ray Hernan previously told the Oireachtas Committee on Transport that cash reserves at the company had fallen to €7 million by the end of last year, and that it recorded losses of €8 million to €9 million in 2016.

He said Bus Éireann would be insolvent by the end of this year if losses continued at existing levels.

Unions have contended that the cuts to premium payments, overtime rates and allowances proposed by management would see staff earnings reduced by up to 30 per cent.

However, company management said earnings would fall by 10 per cent under the plan.

Mr Hernan this week said he would meet the trade unions to discuss the situation at any stage without pre-conditions, and that he was more than willing to listen to any alternative proposals they may have to generate the required savings.

Management at Bus Éireann said on Friday that it wanted to make savings of 10 per cent on its €133 million annual payroll.

It said a range of non-payroll areas were also being reviewed with a view to generating further savings of €17 million, to bring total savings to €30 million.

These areas included advertising, sponsorship, charges and commissions, as well as insurance and legal fees charged to the company by the broader CIÉ group.

The company is also carrying out a review of its garages and stations, maintenance operations and non-core products, including Eurolines, private hire and park-and-ride services.

One of the main unions at Bus Éireann said it would be impossible for staff representatives to come up with their own alternative proposals for generating savings of €13 million from the company’s payroll costs.

The general-secretary of the National Bus and Rail Union (NBRU), Dermot O’Leary, said that Mr Hernan’s request that trade unions come up with alternative proposals to save €13 million, as part of “a previously unseen target of €30 million, is clearly designed to create an unbridgeable gulf between the parties and is akin to throwing an incendiary device at an already volatile situation.

“Mr Hernan’s suggestion that he would, on the one hand, seek to protect ‘core pay’, whilst at the same time slashing upwards of €8,000, through cuts to shift and overtime rates, from a bus driver on a salary of €42,000 is frankly insulting, and would lead one to ponder if the determination of Bus Éireann to protect the shareholder runs the risk of bringing the country to the brink of industrial relations warfare.”

He urged the company to withdraw its plan in order to pave the way for engagement betweeen unions and management.