Bus Éireann in talks for two years with department on losses 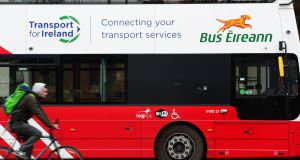 Bus Éireann has been in contact with the Department of Transport for two years about its deteriorating financial position, but three reform plans were rejected, a confidential internal analysis drawn up by the company reveals.

The report, dated September 2016, says the board of the State-owned transport company has been expressing concern about mounting losses since 2014 and that “ stakeholder dialogue” on the issue began in January 2015.

The report shows that in September last year Bus Éireann told the Department of Transport that losses of more than €5 million annually incurred by its commercial Expressway service “continue to erode net assets of the company and threatens the company’s survival across all services”.

The revelations that the Department of Transport has been aware of mounting losses at Bus Éireann for two years come as the company has warned that its financial projections have worsened considerably in recent weeks. It is now forecasting losses of €9 million for last year and plans to implement highly controversial cuts to staff earnings from February 20th.

Unions have warned that the unilateral introduction of cuts in earnings for staff will lead to industrial action.

The Minister for Transport Shane Ross on Monday again ruled out becoming involved directly in finding a resolution to the crisis at Bus Éireann and said it was a matter for unions and management.

The Dáil will debate a Fianna Fáil motion on Tuesday that is critical of the Minister’s handling of the crisis at Bus Éireann. Given the Dáil arithmetic, the Government is likely to be defeated on the issue.

Mr Ross again met the chairman and acting chief executive of Bus Éireann on Monday and it is understood they updated him on the financial situation at the company.

The internal document says that a number of plans aimed at addressing the financial situation were prepared by Bus Éireann and presented to the CIÉ holding group and the Department of Transport since 2015.

These plans were the Bus Éireann strategy and roadmap, produced in April 2015, a five-year plan for Expressway drawn up in February 2016 and a Bus Éireann existence plan, which was compiled between July and September 2016.

However, the internal document for discussion with the Department of Transport says : “These plans have not been accepted, and losses have continued to accumulate.”

Some sources said the various reform plans would have involved upfront payments for redundancies or restructuring and there were disagreements about how these would be funded.

Bus Éireann said on Monday: “There were many corrective proposals drawn up over the last 24 months in a bid to improve the deteriorating financial situation. These culminated in a final implementation plan which was presented to the board and reviewed by Grant Thornton.

“New management are currently working on a new efficiency plan – elements of which have already been introduced – and which will be presented to the board at the end of March.

“We are seeking to engage with unions on other cost savings measures that must be introduced for the business to become competitive and sustainable.”

The document also warns the Department of Transport that implementation of reforms in Bus Éireann could lead to industrial action that could spill over into Dublin Bus and Irish Rail – which form part of the broader CIÉ group – by workers who would be fearful that any measures introduced in Bus Éireann could be seen as a precedent in their own companies.

1 Chris Johns: Ireland risks populist culture war over property and pensions
2 Javid’s EU divergence plans provoke industry backlash
3 Help, I’ve no PRSI stamps – can I still get a pension?
4 Not everyone ‘feeling full benefits of economic growth’
5 Reddit bans misleading deepfakes ahead of US presidential election
6 Giving your child a mobile phone: The pros and the cons
7 Pointy sale: How a Google reject built a $160m company and sold it to Google
8 ‘Short window’ to stop AI taking control of society, warns ex-Google employee
9 Ulster Farmers’ Union calls for vegan ads to be removed from buses
10 Roll up, roll up: capitalism will drive cannabis legalisation in Ireland
Real news has value SUBSCRIBE