Banks brace themselves for impact of Covid pandemic

In store for 2021: Bad loans, major job cuts and the never-ending tracker saga 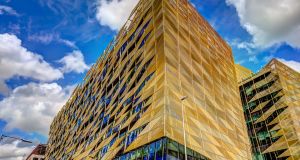 Banks came into 2020 nervous over Brexit, Central Bank (above) mortgage rules and a dysfunctional housing market – that hasn’t gone away.

If 2020 saw Covid-19 deliver the biggest shock to the banking industry since the financial crash, 2021 will tell whether the system really learned the lessons from that earlier crisis.

The Republic’s five retail lenders have guided that they will end up setting aside as much as €3.6 billion in 2020 to cover bad loans – representing the bulk of the losses they expect to stomach as a result of the pandemic.

However, it will be this year before defaults spike as the effects of temporary payment breaks – offered by the industry on an almost no-questions-asked basis between March and September – and extraordinary Government coronavirus supports for households and business, wear off.

Debt ratings agency Fitch predicts that Irish mortgage arrears of at least 90 days – which had fallen from a 2013 peak of almost 13 per cent to 5.6 per cent in June – will spike at 14-16 per cent of home loans in 2021. But analysts predict that small business loans, particularly in the hospitality and tourism sectors, is where most of the problems will lie, as lenders try to work out which business will survive and which will not. Banks and regulators say the sector is much better prepared to restructure distressed loans than it was during the last crisis. We’ll find out this year.

Davy analyst Diarmaid Sheridan estimates that AIB, Bank of Ireland and Permanent TSB (PTSB) will end up weathering a combined €4.1 billion of loan impairment charges between 2020 and 2022, a fraction of their financial crisis-era losses.

Analysts say a legacy of the last crisis is that Irish lenders have among the highest levels of capital reserves across European banks relative to total assets, and so will weather even the most pessimistic economic scenarios this year without needing to raise additional equity.

Sheridan even sees AIB and Bank of Ireland, which abandoned plans to hand out dividends earlier this year as European regulators issued a de facto ban on such activity, resuming shareholder payments in early 2022 as they are forecast to return to making profits this year.

Still, the underlying impact of the pandemic will be felt for much longer than the expected bad loans spike. Irish banks had already been struggling to rebuild their loan books following more than a decade of contraction amid nervousness over Brexit, Central Bank mortgage rules and a dysfunctional housing market.

The Covid-19 crisis will only have exacerbated that and is likely to have resulted in Irish banks’ loan portfolios shrinking by 6 per cent this year, according to Goodbody Stockbrokers analyst Eamonn Hughes. Net interest income is unlikely to recover to last year’s levels until 2023, he said.

Brexit will also weigh on the economy, even with a narrow trade deal. However, a successful roll-out of a Covid-19 vaccination programme in 2021 will provide welcome relief and may persuade households to release some of the savings squirrelled away this year.

The Central Bank estimates that Irish households put €11 billion on deposit during the first nine months of the year, leaving overall deposits at record levels, above €120 billion.

Inside Business with Ciaran Hancock · Looking ahead to 2021 with Danny McCoy, Anne Graham and Mark Paul

Still, banks, which slashed their employee numbers by 45 per cent in the decade after the 2008 crash as their loan books shrank at an even faster pace, are responding to these latest income challenges with another massive cost-cutting drive.

Bank of Ireland said in late October that the equivalent of 1,450 full-time roles, or 14 per cent of its workforce, will be eliminated by the end of 2021 – with a total of 1,700 full- and part-time staff taking voluntary redundancy.

AIB will this year reopen a programme to cull 1,500 net jobs by 2023, having paused the plan earlier this year as Covid-19 struck. Last month, Permanent TSB said it was cutting 300 jobs, mainly targeting managerial positions as it seeks to reduce overall numbers by 12.5 per cent.

Deloitte has estimated that Irish retail banks are likely to cut up to 30 per cent of jobs in the next five years as the pandemic results in the switch by customers to digital banking.

While Ulster Bank in the Republic announced in early September that it planned to cut 266 jobs, or 9.5 per cent of its workforce, it emerged within days that its UK parent NatWest (formerly known as Royal Bank of Scotland) was carrying out a strategic review that was actively looking at closing down the Irish unit.

The outcome, expected to be announced in the coming months, will be the biggest development in Irish retail banking in recent years.

A potential exit of Ulster Bank follows the departure of a string of overseas lenders, including Bank of Scotland, Danske Bank and Rabobank which retrenched from the Republic following the 2008 crash. The move would increase the dominance of Bank of Ireland and AIB in a market where local lenders Anglo Irish Bank and Irish Nationwide Building Society also imploded.

Ulster Bank has about a 15 per cent share of the mortgage market, 20 per cent of small business (SME) lending and a strong corporate banking business – making its potential exit much more significant than that of any of the other overseas banks.

“Ireland already has one of the least competitive mortgage markets in Europe. An exit of Ulster Bank would only make things worse for borrowers,” said John O’Connell, general secretary of the Financial Services Union (FSU), who is pushing for a proper debate between policymakers, regulators, bankers and consumer bodies on the future of banking.

“They said the banks were too big to fail back in 2008. The remaining banks are even more dominant now. We are sleepwalking into duopoly.”

The arrival of Avant Money, a unit of Spanish lender Bankinter, into the Irish mortgage market in late 2020, offering rates of below 2 per cent for properties with loan-to-value ratios of 60 per cent or less, will not replace Ulster Bank. But it is the market for small- to medium-sized enterprises (SMEs) that will be most affected, as the number of banks really serving this area will be cut to two: AIB and Bank of Ireland.

Hughes sees an opportunity for Permanent TSB, which has designs on developing an SME book from a small base, to snap up Ulster Bank’s business loan book – delivering a win for the bank and the State. Other banks would be expected to bid for the UK-owned bank’s remaining loans alongside overseas investment firms if NatWest does decide to call time on its Irish unit.

Meanwhile, five years after the Central Bank ordered lenders to go through their mortgage books for cases where borrowers were wrongly denied their right to a cheap tracker loan linked to the European Central Bank (ECB) rate, or were otherwise overcharged, a line still has not been drawn under the scandal.

In September, KBC Bank Ireland was fined €18.3 million for its role in the debacle, following on from PTSB and its former subprime lending unit Springboard Mortgages being levied with €25.5 million of sanctions in recent years.

The regulator is continuing to carry out enforcement investigations against four other lenders – Bank of Ireland, AIB and its EBS unit, and Ulster Bank. The industry has admitted to about 40,500 cases where borrowers were affected by the tracker fiasco, and has paid out about €710 million in refunds and compensation to date.

The Financial Services and Pensions Ombudsman is currently looking at a number of tracker-related complaints from customers that may have wider ramifications. The tracker story will continue to hang over the industry in 2021.

While banks stalled planned sales of non-performing loan (NPLs) earlier this year – as they devoted their attention to dealing with the Covid crisis – AIB recently relaunched a planned sale of a portfolio of mortgage loans that are deeply in arrears.

The book, dubbed Project Oak, initially included loans that had an original value of €1.3 billion and was expected to achieve a discounted rate of between €700 million and €800 million.

It is understood that the level of loans in the portfolio has since declined, due to ongoing loan restructuring. A portion of family home loans back on the market are earmarked to be taken over by so-called “ethical” finance houses and charities that have been set up to use the State’s mortgage-to-rent scheme.

Bank of Ireland, also under pressure to resolve legacy NPLs as the sector faces a spike in Covid-related defaults, is preparing to shift a pool of soured mortgages early this year. The bank is known to be looking at refinancing these loans in the bond market through a process called securitisation.

The European Commission, meanwhile, set out proposals in December to develop the international market for problem loans to prevent another spike in NPLs across the euro zone banking system.

The focus in Ireland, for now, is on shifting NPLs that remain from the last crisis. But is it only a matter of time before banks turn to attention to getting rid of the more intractable problem loans stemming from the pandemic?