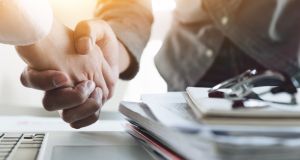 A merger between UniCredit and SocGen has been considered by the latter on several occasions over the past 15 years. File photograph: Getty Images

Italy’s UniCredit is planning to merge with French rival Société Générale in a bold move that would mean two of Europe’s big banks join forces, leading the way for an expected round of banking mergers in continental Europe.

Jean-Pierre Mustier, UniCredit’s French chief executive, has been pioneering the idea for several months, according to people close to the situation. They said no formal approach has been made but SocGen directors have also been studying the possibility of a combination.

Senior figures on both sides stressed discussions were at an early stage and Italy’s volatile political situation had pushed back the timetable for a deal from the original plan of 18 months.

Mr Mustier considers SocGen, whose investment bank he once ran, an ideal partner for the Italian lender, buttressing its investment banking and eastern European operations. For SocGen, one of the main benefits would be gaining a leading position in Italy and Germany, both in retail and corporate banking.

But any UniCredit-SocGen deal would be fraught with difficulty. Aside from Italy’s political turbulence – and hostility to foreigners owning or running Italian businesses – regulators may be unnerved by the combination of two lenders already deemed systemically important.

A merger between the two has been considered by SocGen on several occasions over the past 15 years and in recent months by senior executives. However, on Sunday the bank denied “any board discussion regarding a potential merger with UniCredit”.

Europe’s banks are under increasing pressure to bulk up, due to their relative decline compared with booming US rivals. The Financial Times reported last month that members of Barclays’ board had discussed a plan to combine with UK rival Standard Chartered. The European Central Bank has signalled it would like to see cross-border deals as part of efforts to champion the pan-eurozone banking union.

Mr Mustier has been outspoken on the topic. At the IIF Brussels conference last month he said the bloc needed bigger, pan-European banks to fund credit demand and equity financing.

According to senior financiers, Mr Mustier’s focus on SocGen was evident as far back as the Italian bank’s vital €14 billion capital increase last year. During the fundraising he told staff he wanted UniCredit’s ’s market capitalisation to surpass SocGen’s, according to people directly involved in the talks. At Friday’s close, UniCredit was valued at nearly €33 billion compared with SocGen’s €32 billion. The capital increase will have quashed opposition to any cross-border deals within the Italian banking industry.

Neither group would be ready to proceed with a deal for at least a year, bankers said. Mr Mustier’s repair work on UniCredit, which has been hit hard by billions of euros of non-performing loans, is expected to last at least until mid-2019.

Analysts say SocGen is not in a position to do any deals, either. It has yet to reach an agreement with investigating authorities over its involvement in the Libor rate-rigging scandal and two other inquiries. Its share price has slipped 13 per cent so far this year as investors have been spooked by the pending fines, weak trading performance at its investment bank and the Libor-related departure of deputy chief executive Didier Valet, widely seen as a successor to chief executive Frédéric Oudéa. Mr Oudéa has recently been given another term at the top of the bank, pending shareholder approval next May.

For Mr Mustier any deal would be a “resurrection play”, friends said, potentially installing him as chief executive of the combined group a decade after he might have expected to get the top job at SocGen. The investment banker quit the French bank after a court criticised him for failing to spot the errors of rogue trader Jérôme Kerviel.

Mr Mustier, who is credited with having turned round UniCredit’s ’s fortunes, has seen the bank’s share price rise 27 per cent since his arrival in the summer of 2016, notwithstanding the giant capital raising and recent political turmoil.

He has always viewed a cross-border deal as essential to the bank’s future strategy. Last autumn he considered a bid for Commerzbank, according to people briefed on the issue, but was rebuffed by the German bank. – Copyright The Financial Times Limited 2018