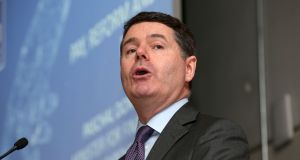 Irish bank pay caps and bonus restrictions are now a major worry, a group of investors have told the Minister for Finance Paschal Donohoe, as the Government weighs whether to ease pay caps at bailed-out lenders.

Mr Donohoe met a shareholder group brought together by Deutsche Bank in Dublin on November 22nd. At the meeting, investors told Mr Donohoe that restrictions on executive pay at AIB and other partly State-owned lenders are “now a huge concern”even as they recognised the political sensitivity around easing restrictions, according to an internal summary of feedback prepared for the Minister.

1 Gardaí cannot prosecute people who breach midlands movement restrictions
2 Harry McGee: We are seeing the return of Straight-Talking Leo
3 Irish in Australia: ‘We are in for a few hard years’
4 TV Guide: 24 of the best shows to watch this week
5 Covid-19: One more death and 174 further cases confirmed in State
6 German nudist chases wild boar that stole laptop at Berlin lake
7 Meet the Bearman of Buncrana: ‘I knew about Joe Exotic for years’
8 Midlands lockdown Q&A: Firstly, is it a lockdown or not?
9 Garda checkpoints in Kildare, Laois and Offaly as restrictions come into force
10 Midlands lockdown: ‘Why shut down Offaly and leave Dublin open?’
11 Are we really facing the death of the office?
12 Pat Hume: The woman who never gave up
13 Inside the dog-trafficking trade: ‘After drugs, it’s guns, then pups’
14 ‘It is soul destroying’: Kildare hotelier on calling guests to cancel
15 All eyes on Tenet, the spy movie with everything to prove
16 Revealed: the NPHET advice to Cabinet ahead of midlands lockdown
17 Pandemic problems: Experts answer your queries on sex, parenting and relationships
18 Meat plant clusters may be down to softly-softly approach
19 Rory McIlroy puts integrity ahead of glory in US PGA second round
20 The battle to save an Irishman’s eclectic art collection in a London council flat
21 ‘Saudi Arabia is where the opportunities will happen in future’
22 Is it not time we celebrate Ireland and Britain’s closely intertwined culture?
23 Summer sun: Temperatures set to soar to 26 degrees
24 Scarlet for ya: Paul Mescal does classic Connell in The Rolling Stones’ new video
25 10 upgrades that will add value to your home and 5 that probably won’t
26 Cambodia Bill to ban women wearing short skirts sparks outcry
27 Trump to sign executive orders for coronavirus stimulus
28 Escape to west Cork: Majestic views, spectacular food and a warm welcome
29 British cash for Northern Ireland shows scale of Brexit disruption
30 Second Midlands GAA club shuts down activity after outbreak among players
31 US court blocks ban on trans people altering sex on birth certs
32 Midlands lockdown: Movement restrictions in place for residents of Kildare, Laois and Offaly
33 Sand-hued cyclepaths changing the face of south Dublin coast
34 Thousands protest against Netanyahu over Covid-19 and alleged graft
35 Pollan is unique to Ireland so why don’t we eat more of it?
36 David McWilliams: John Hume understood the power of credit
37 Paris: Compulsory wearing of masks ordered outdoors
38 Masks Q&A: Who has to wear them in shops and what happens if you don’t?
39 Two men charged over €3m drugs seizure remanded in custody
40 Was Caroline Flack ‘hounded’ to death by tabloid media or us?
Real news has value SUBSCRIBE