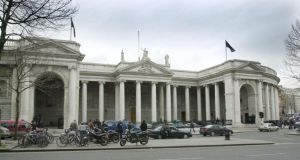 The Bank of Ireland on College Green: It is understood the bank will apply to Dublin City Council for planning permission for the College Green Cultural and Heritage Centre before Christmas. Photograph: Alan Betson

Bank of Ireland will spend €10 million refurbishing and meeting some of the running costs of the heritage centre it is providing to the State at its College Green branch to commemorate the “decade of centenaries” from 2016 onwards.

It is understood the bank will apply to Dublin City Council for planning permission for the College Green Cultural and Heritage Centre before Christmas.

The centre will comprise about 600 sq m of multipurpose exhibition space. It will in effect be a “white-box” space that can be adapted for exhibitions run by the State to commemorate centenaries from that of the Easter Rising in 1916 through to the early years of the Irish Free State.

Bank of Ireland has agreed to make the space available for a 10-year period.

It will pay for its refurbishment and make an annual contribution towards the running cost of the centre, which will be used by the Department of Arts, Heritage and the Gaeltacht.

The centre will be accessible to the public from the entrance in the Gandon-built portico on Westmoreland Street and is expected to prove popular with visitors to the city.

The space being handed over does not include the former House of Lords in the College Green building.

Bank of Ireland already allows access to this room by tourists, and functions are hosted there each year.

Calls had been made in recent years by politicians and lobby groups for Bank of Ireland to hand over the historic complex of buildings at College Green to the State in recognition of its taxpayer-funded bailout following the collapse of the financial sector here in late 2008.

However, the bank, which is still 14 per cent owned by the State, has argued that College Green is its flagship branch, with about 30,000 customer accounts.

Construction work began in 1729 and it housed the Irish parliament until the Act of Union in 1800 abolished its powers. Bank of Ireland purchased the complex in 1803.