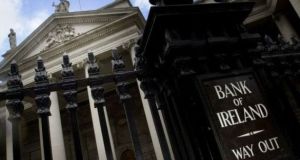 Workers at Bank of Ireland have voted in favour of a new pay deal which will see the majority of staff receiving a 2.2 per cent rise this year and a further 2.6 per cent in 2017.

Members of the finance union IBOA in Bank Of Ireland backed the new pay proposals in a ballot held this week.

The agreement comes after independent mediator Martin King recommended the increase late last year. Mr King proposed that the first general increase should come into effect next April but be backdated to January.

IBOA general secretary Larry Broderick welcomed the new deal, which he described as significant because it differentiates between the need to provide compensation for cost-of-living changes and performance.

Mr Broderick said the IBOA has also begun balloting its members in Ulster Bank on a new pay offer which would provide an average increase of 2 per cent for 2016.