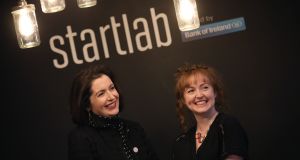 Bank of Ireland has opened a dedicated incubator space for start-up companies above its branch on Camden Street in Dublin city centre.

It is part of a €10 million investment by Bank of Ireland in its branch network and was opened on Friday by its new chief executive Francesca McDonagh to coincide with the launch of its 17th national enterprise week.

The bank has provided desk space for 50 people, which it expects will accommodate about 15 start-up companies. There will also be an event space that can hold 70 people.

The newly opened office space will have its own front-door entrance, allowing the start-ups to use the premises outside normal banking hours. The ground floor of the branch now provides self-service banking, with no over-the-counter transactions.

The Camden Street facility follows on from similar initiatives by Bank of Ireland in Galway and New York this year. It also plans to open an incubator space in Limerick.

Speaking at the launch, Ms McDonagh described the office facility as a “unique offering for start-ups and SMEs”, providing both mentoring and work space support to the companies.

“StartLab Camden Street represents the latest exciting development in how we are supporting enterprise and providing guidance to start-ups as they learn how to scale and expand their business,” she said.

Applications for the Camden Street StartLab are now open. Once a technology company has developed a proof of concept, it can apply to receive six months of free mentoring, support and work space from the bank.

Bank of Ireland is also providing incubation space in Camden Street to this year’s Enterprise Ireland Fintech Competitive Start Fund, providing desks and access to mentoring from its innovation and enterprise team.