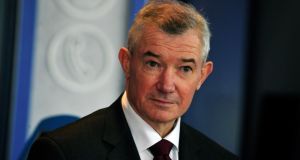 Richie Boucher Group Chief Executive and Bank of Ireland Group pictured at the companies preliminary results for 2014, in a new branch of Bank of Ireland in Grand Canal Square. Photograph: Aidan Crawley

Bank of Ireland has provided about 6,000 documents to the Oireachtas Banking Inquiry, its chief executive Richie Boucher has said.

Speaking at a press briefing about the bank’s annual results, which showed it made a pre-tax profit of €921 million in 2014, Mr Boucher said the bank had “constructively” engaged with the inquiry to provide it with 25,000 to 30,000 pages of information relating to the period from 2001 to 2013.

“We haven’t withheld anything,” he said, adding that the bank has used third parties to help it collate the information requested by the inquiry.

Mr Boucher was yesterday sent notification from the committee that it wants him to appear before the inquiry on May 6th to give testimony about his role at the bank as a senior executive before the financial crash in late 2008 and his time as chief executive since February 2009.

Mr Boucher said he would have been “astounded” if the inquiry had not requested him to appear before the 11-person committee.

Former Bank of Ireland governors Richard Burrows and Laurence Crowley and its ex-chief executive Brian Goggin have also been asked to appear before the inquiry as part of the Nexus Phase of its hearings, which will begin on April 22nd and run until September.

Mr Boucher said it was a “personal decision” for the former Bank of Ireland directors as to whether they agree to appear at the inquiry but “I would be surprised if they didn’t”.

Mr Boucher said he was not aware of any requests made by the former directors for assistance from the bank or access to old files in advance of them appearing before the committee.

Michael Torpey, current head of corporate and treasury at Bank of Ireland, has also been requested to appear at the inquiry.

Mr Boucher said the bank would have to admit to the inquiry that it “made mistakes” in the years leading up to the crash of the financial sector here. “What happened happened. We deeply regret it.”

Bank of Ireland received a bailout from the State of just under €5 billion between 2009 and 2011, all of which has been repaid.

It was the only domestic bank to remain outside of majority State control. The State continues to own 14 per cent of the bank’s shares.

1 How much state pension will I get next year?
2 Ulster Bank to introduce new card payment controls on app
3 Covid-19 will worsen shortage of accountants, says CPA Ireland
4 Oxford Covid vaccine trials offer hope for elderly
5 Tesco takes to the skies with home delivery by drone
6 Apple planning updates to its AirPods earbuds next year
7 Guinness brings out a non-alcoholic version of the black stuff
8 Bombardier to sell aerostructures business to US company for $275m
9 How long can Government afford to keep State pension age at 66?
10 Ireland v the rest of the world: Do we pay too much tax?
Real news has value SUBSCRIBE