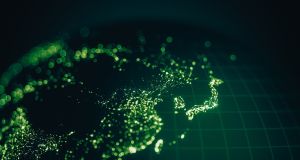 Pioneered by the World Bank more than a decade ago, green bond sales have ballooned in recent years. Image: iStock

AIB on Wednesday became the first Irish bank to venture into the burgeoning green bonds market, raising €1 billion of capital to support lending towards renewable energy projects and green buildings.

While the focus among banks and companies active in the green bonds area has been on raising senior debt for direct funding of green projects, AIB is the second European bank issue a form of subordinated, or junior, debt instrument, called Tier 2 capital. In July, Dutch lender De Volksbank sold €500 million of subordinated Tier 2 green bonds.

The new AIB bonds, which are due to mature in 10½ years, will be ringfenced capital reserves to underpin the bank’s existing €1.7 billion green loan portfolio, which comprises green commercial buildings and renewable energy projects in Ireland and Britain.

The bank said it may also in time include some of its fledgling green-mortgage portfolio of loans against houses with the highest energy efficiency ratings.

The amount of bonds sold was more than double the minimum level that market sources had predicted earlier on Wednesday. The banks managing the deal secured as much as €2.5 billion of demand for the AIB offering.

“AIB’s first green bond offers socially responsible investors an opportunity to support AIB as it continues to transition its business towards greater environmental sustainability and support its customers on the journey to a low-carbon future,” said chief executive Colin Hunt. “Through our actions, from our green mortgage product, to our €5 billion green lending fund, we are determined to play our part in enabling a sustainable economic recovery.”

Citigroup, HSBC, ING, JP Morgan, Morgan Stanley and Dublin-based Davy have been hired to market the transaction. The new bonds were priced to carry an interest rate, or coupon, of about 2.9 per cent.

The bank has an option at the end of November to redeem €750 million of existing Tier 2 capital.

AIB launched an initial framework document last year to show potential future investors in green bonds how the bank would put any money raised to work against projects that are in line with the International Capital Markets Association’s green-bond principles.

Bank of Ireland launched a similar framework document earlier this year and is said to be preparing to raise between €300 million and €750 million in an initial green bond sale by the end of 2020.

Pioneered by the World Bank more than a decade ago, green bond sales have ballooned in recent years, as states and companies seek to live up to the Paris climate accord and investor demand grows for socially responsible investment opportunities.

Green bond activity has been more muted so far this year as countries and businesses focused on raising mainstream debt amid the coronavirus crisis. Still, credit ratings firm Moody’s estimates that full-year green bond sales could still amount to as much as $225 million, driven by European issuers.

Ireland’s National Treasury Management Agency entered the market in 2018 with the sale of €3 billion of green bonds and raised an additional €2 billion in 2019. ESB became the first Irish company to sell such debt on the public bond markets in June last year.