Investment in Irish regtech start-ups from £5.5 million to £238 million in recent years 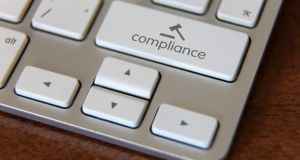 More than $4 billion has been invested in regtech companies worldwide since the beginning of 2016, figures compiled by FinTech Global show.

Irish companies operating in the regulatory technology or ‘regtech’ space are among the best in the world, according to a new ranking which places them above rivals from financial powerhouses such as Singapore and Hong Kong.

Overall, seven regtech companies have been included in the latest RegTech 100 list, which ranks the most innovative companies working in the space.

This places the Republic in third spot overall behind the United States and UK and ahead of Singapore, Hong Kong, Germany and France.

The impressive performance comes as figures published by RegTech Analyst, which compiled the latest rankings, show investment in Irish regtech companies has jumped from £5.5 million in 2014 to £238 million (€270 million) in the first three-quarters of this year.

Richard Sachar, director or RegTech Analyst, described the performance by Irish companies as a “fantastic result”, but also said it should come as no surprise.

“Ireland has clearly established itself as one of the leading regtech innovation hubs in the world,” said Mr Sachar.

“The country has developed an innovative ecosystem that offers many of the key factors needed to successfully start and scale up a financial technology company – support from government and regulators, a dynamic economic development agency [Enterprise Ireland], a well-established investment management industry, the availability of high-quality tech talent and good access to investment capital,” he added.

Regtech, is increasingly seen as one of the largest and most important sectors within the fintech space, with huge growth in recent years as banks and other financial institutions grapple with the costs and complexities arising from regulatory requirements.

Figures compiled by FinTech Global show over $4 billion has been invested in regtech companies worldwide since the beginning of 2016.

1 This charming man: how Paschal Donohoe won the Eurogroup presidency
2 Goodbody’s planned €155m sale to Bank of China falls through
3 ‘My rent here is so low it’s a joke’
4 ‘Sad day’ for House of Ireland as tourism retailer goes out of business
5 Caveat: The tourism sector deserves to be taken more seriously in this crisis
6 Remote workers double as users prepared to pay more for broadband
7 Banks will be judged less on payment breaks and more on next step
8 Tale of two Disneys highlights differences in Covid-19 strategies
9 Two Irish entrepeneurs shortlisted for leading innovators prize
10 Pharmaceutical industry signals it won’t extend drugs deal
Real news has value SUBSCRIBE