More than 1,500 business leaders to gather for annual ceremony in Dublin tonight 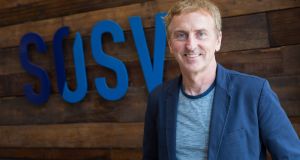 Sean O’Sullivan: “I am very grateful to be recognised and it is a wonderful honour.”

Irish-American tech veteran and former Dragons' Den star Seán O’Sullivan is to be honoured at this year’s EY Entrepreneur of the Year Awards, which take place on Thursday night.

More than 1,500 business leaders are to gather at the Citywest hotel in Dublin for the prestigious awards, which look to recognise the country’s best entrepreneurs.

Mr O’Sullivan, who is credited with co-creating the term “cloud computing”, and was an early backer of companies such as Netflix, got his entrepreneurial start in 1985 as a founder of MapInfo, which went on to become a $200 million public company with over 1,000 employees worldwide. It was eventually sold for $408 million in 2007.

He currently leads early-stage venture capital firm SOSV, which was originally founded in Cork in 1995 as a personal investment fund but has since scaled to eight partners and more than 90 staff worldwide.

SOSV has funded more than 700 start-ups to date and is currently backing over 150 companies through its various accelerator programmes which cover areas such as hardware, software biology, food, robotics, medical devices, transportation and green energy.

Mr O’Sullivan is to receive a special award at the EY awards ceremony “in recognition of his embodiment of life-changing innovation and outstanding service to global entrepreneurship”.

“I am very grateful to be recognised and it is a wonderful honour. It gives me pause and makes me reflect on the incredible journey I have had and the wonderful people that have joined me along the way,” he said. “The success of SOSV all spun out of Ireland and it has been great to retain our links,” Mr O’Sullivan added.

One of the few former Dragons’ Den stars not seeking to become president of Ireland, the entrepreneur laughed when asked if he regretted not throwing his hat in the ring this time out and categorically ruled out any future presidential run.

The 24 finalists in this year’s EY Entrepreneur of the Year awards collectively employ more than 2,700 people and last year generated revenues in excess of €150.3 million.

Now in its 21st year, the awards, which will be broadcast on RTÉ One at 23.15pm, is divided into three categories: emerging, industry and international with eight finalists per category.

Previous winners of the overall EY Entrepreneur of the Year award include Harry Hughes of Portwest, Brendan Mooney of Kainos, Anne Heraty of CPL Resources, John and Patrick Collison of Stripe, and Liam Casey of PCH.

1 In this strangest of recessions, what happens next for Ireland?
2 Michael O’Leary is the boss you want to lead an airline out of crisis
3 Bank of Ireland sees about 2,000 staff apply for voluntary redundancy
4 Best Covid-19 ‘influencers’ will avoid hectoring
5 Should I switch bank now with Ulster Bank at risk of closing?
6 Fortnite owner signs multimillion deal to buy Irish ‘kidtech’ firm
7 Ireland’s Covid-19 economy in five graphs
8 EY Entrepreneur of the Year: nominee profiles
9 Estée Lauder staff at Dublin airport plan further strike action
10 Ireland is in danger of losing the woods for the trees on emissions reduction
Real news has value SUBSCRIBE