Nominations open for EY Entrepreneur of the Year awards 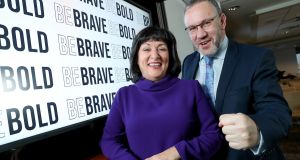 EY Entrepreneur of the Year awards judge Anne Heraty and EY partner Kevin McLoughlin at the launch of the 2019 programme.

Nominations have opened for the 2019 EY Entrepreneur of the Year awards, which are now in their 22nd year.

The awards, which operate in more than 60 countries worldwide, work to recognise, promote and build a supportive community around Ireland’s high-growth entrepreneurs.

This year’s programme will see 24 companies selected to compete across three categories – emerging, industry and international – with eight finalists chosen per award.

The awards are open to businesses of all sizes and sectors with the overall winner going on to represent the country at the World Entrepreneur of the Year finals in Monaco in June 2020.

“The importance of entrepreneurship as a leading source of innovation, job creation and global economic growth is becoming increasingly clear. We see such a vast array of businesses come through the programme, all of which have the potential to disrupt industries overnight, which makes the job of the judging panel increasingly difficult year after year,” said Anne Heraty, chief executive of CPL Resources and chair of the awards panel.

Last year saw a strong mix of male and female finalists across nine different sectors who collectively employed more than 2,700 people and generated aggregate revenues in excess of €150 million.