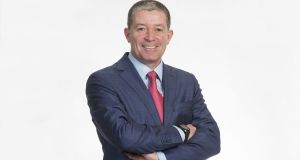 Dominic Fitzpatrick has had little respite from the media sector over the course of his life. He grew up in the industry as his father, a lawyer, held a small shareholding in the Irish News. He ultimately bought out many of the other shareholders to take editorial control.

Today, the group is far more than just a publisher. In addition to producing the Irish News, it runs a contract printing business and owns and runs a network of local radio stations in Northern Ireland.

Having obtained a business degree at university, Fitzpatrick was sent to learn the newspaper trade in the Liverpool Echo before returning to the Irish News.

Now, the paper has the highest circulation of UK regional papers, beating the Scotsman and the Wigan Post, and although circulation has dipped, the paper is resilient in an increasingly digital world.

Additionally, it has overtaken its largest competitor, the Belfast Telegraph, as the title with the largest circulation in Northern Ireland.

The addition of the Q Radio network has helped the company offer multi-platform advertising solutions and it now has a significant share in the Belfast market. This is where Fitzpatrick sees growth with further acquisitions very much on the radar.

It’s quite simple really, we have tried to stay in markets that we understand and play to our strengths.

Starting a new printing plant having been out of the market for five years. This was against the run of play but has proved to be a very sound decision.

Digital subscribers to Irishnews. com offer us an audience outside of Ireland, and Q radio has a digital platform that gives us reach to a global audience.

I’d like to continue to develop and grow all parts of the business and, where appropriate, develop new opportunities.

How are international political developments such as Donald Trump’s presidency and tax reform along with Brexit impacting on your business?

The continued erosion of trust, which had become a currency since Donald Trump’s election, has reinforced to a wider audience that trusted and reliable media brands are a very important part of life. We have to prove the truth of our printed word.

‘Red Tape’ that hampers growth most:

Everyone makes mistakes. It’s important to learn from them and to get up and go again.

My dad, Jim Fitzpatrick, who is chairman of the company. I have worked with him every day for the past 30 years.

What would make you a better leader?

More time to spend with my team. There are only so many hours in the day and I can’t be everywhere. Thankfully, I have strong leadership and decision making in all areas of the business.

What is the single most important piece of advice you would offer to a less experienced entrepreneur?

Don’t be afraid to ask for advice as people are generally happy to give it.

1 Sean Quinn stunned at rebranding of Quinn Industrial Holdings
2 Probate is changing: What does that mean for you?
3 Will tracker mortgage be at risk if Ulster Bank closes?
4 Dublin Aerospace takes over Flybe’s aircraft servicing base at Exeter Airport
5 Irish golf tourism faces ‘wipeout’ unless Covid travel restrictions eased
6 Swedish newspaper eyes best financial result this century
7 Three Ireland switches on 5G network around the country
8 Irishwoman Adrienne Gormley joins N26 as chief operating officer
9 Me & My Money: ‘Money can’t buy you happiness but it can make life a lot easier’
10 Should I switch bank now with Ulster Bank at risk of closing?
Real news has value SUBSCRIBE