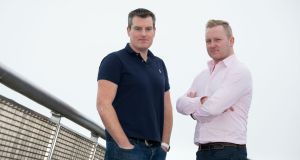 Teamwork founders Daniel Mackey and Peter Coppinger are representing Ireland at the EY World Entrepreneur of the Year awards in Monaco this week. Photograph: Tom Honan

Irish technology company Teamwork is forecasting revenues of $31 million (€27.5 million) this year, as it progresses plans for a new €28 million campus in Cork.

The fast-growing company, whose founders are representing Ireland at the EY World Entrepreneur of the Year awards in Monaco this week, reported turnover of $25.2 million (€22.2 million) in 2018. It is targeting sales of $50 million (€44.1 million) by the end of 2021, with the ultimate goal of hitting $450 million (€397 million) in annual recurring revenue within a decade.

Founded in 2007, by Daniel Mackey and Peter Coppinger, Teamwork is a software-as-a-services (Saas) company whose clients include Disney, Netflix, Forbes, Paypal and Spotify.

“We have been growing at a 40 per cent annual growth rate but think we can grow even faster than this. The only thing stopping us from selling more at the moment is getting the word out that we exist. We’re looking to change this by ramping up the marketing machine next year,” Mr Mackey told The Irish Times.

The company has been busy of late, opening a new office in Boston, undergoing a rebrand and introducing two new products to its software suite. It also announced plans to create 85 new jobs in Belfast as part of a multi-million euro investment in the city.

“Everything is in place for us to hyperscale – we’re growing fast and the two newly introduced products are already contributing to the bottom line and are resonating with existing customers so our strategy of having a full suite is working,” added Mr Mackey, Teamwork’s chief technology officer.

Teamwork’s founders also revealed more details of their plans to build their own version of Apple’s $4 billion “spaceship” campus in Cork, with Mr Coppinger saying he was hopeful that construction could commence on the project as early as next year.

“Our existing campus is gorgeous but it wasn’t designed as a software centre of excellence so we’re looking at having a custom-built campus with over 200 small private offices as we believe in giving developers a door they can close,” said Mr Coppinger, the company’s chief executive.

“The original plan was to develop two buildings but once we realised it could cost us about €48 million we scaled back because we can always add the second building at a later date,” he added.

This year’s finalists have companies with combined annual revenues of $44 billion (€38.8 billion) and which employ more than 159,000 people globally.

The Teamwork founders, who received a good luck letter from Taoiseach Leo Varadkar on their arrival in Monaco, said they were quietly confident that they could take home the top prize.

“It is an incredible experience to be here among some of the best and biggest companies in the world and of course a huge honour to represent Ireland on the global stage,” said Mr Coppinger.

“We’re up against it as there are some companies here whose revenues are approaching $2 billion and who have a lot of venture capital backing. But we’re confident that we will represent ourselves well and that we have a compelling story to tell,” he added.

1 Save yourself money and heartache by reviewing your house insurance
2 Should I switch bank now with Ulster Bank at risk of closing?
3 ‘I have three children and a dog, so I feel like a bit of a human ATM’
4 Belfast mailbox address used by account holder in Russian money-laundering scheme
5 EU watchdog calls for end to Covid loan payment breaks
6 Aldi and Lidl at back of queue during UK pandemic
7 Will brother’s widow get half of our parents’ estate when they die?
8 Finance Ireland refinances mortgages with low level of payment breaks
9 Swiss drug giant Roche pays €380m for Irish biotech Inflazome
10 Isme to support legal action against pension tax relief limit
Real news has value SUBSCRIBE