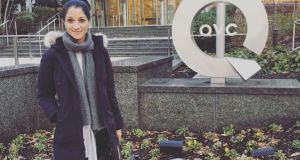 Irish skincare company Pestle & Mortar is set to double its revenues this year on the back of a major expansion of its business globally, including major contracts with UK retailer Marks & Spencer and with Harvey Nichols in Hong Kong.

Sonia Deasy, a co-founder of the Naas-based business, told The Irish Times the company was also set to launch its products into Australia, Russia and the United Arab Emirates.

And it plans to launch a website in China, a growing market for cosmetic sales and where the company sources all of its packaging.

“We are at €3 million [in revenue] and we are going to double that to over €6 million this year,” Ms Deasy said on the fringe of the EY Entrepreneur of the Year Awards CEO retreat in Hong Kong.

“We’re launching into 45 M&S stores in the UK in two months’ time. We’re only going into the top performing stores. We got M&S because of appearing on [TV shopping channel] QVC; that’s why they came knocking on our door.”

The M&S contract also includes shelf space in three of its outlets in the Republic.

The Irish company moved into a new 929sq m (10,000sq ft) premises in Naas four weeks ago. “It’s like a showcase of our brand so we can bring distributors from Russia or China over to really impress them.”

Ms Deasy has been selected as a finalist in the emerging category of the annual EY Entrepreneur of the Year Awards. Last Thursday, some 120 Irish business leaders departed for Hong Kong to participate in what is considered to be the largest trade delegation from Ireland to the region.

Launched almost five years ago by Ms Deasy and her husband Padraic Deasy, Pestle & Mortar has eight skincare products that range in price from €43 to €76 and are designed to rehydrate your skin.

Its products will also begin appearing in Harvey Nichols in Hong Kong in June, which Ms Deasy, whose parents were born in India before moving to Ireland 55 years ago, said would give the brand “kudos” with Chinese customers.

“We’re really ready for this expansion. Being able to say to a customer that we’re stocked in Harvey Nichols Hong Kong, helps in all markets.”