‘Ideas are great, but money is what keeps them alive’

EY Entrepreneur of the Year finalist Richard Kennedy of Devenish 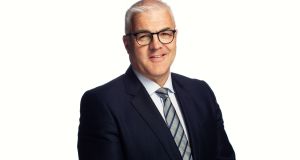 Richard Kennedy: “being from an entrepreneurial family I assumed I would go into business once leaving college, so it was a natural progression for me”

Having grown up around a livestock mart in Co Sligo, Richard Kennedy was perhaps ideally suited to enjoying a successful career in the food and feed industries. The entrepreneur has risen to the position of chief executive with Belfast-based Devenish, having previously held senior roles at the company which supplies high quality nutritional products for the poultry, pig, ruminant, equine, companion and aquaculture industries.

Devenish was bought by its current major shareholder Owen Brennan in 1997, and since then has increased its turnover from £5 million to £250 million last year. Kennedy also has a stake in the business.

Under Kennedy’s watch the company last year received €118 million in funding from the European Investment Bank, Danske Bank and Ulster Bank to develop the business as it looks to increase turnover to £350 million within the coming three years.

The UCD graduate, who still lives near that livestock mart in Sligo, unusually “recharges his batteries” on his family farm, and can also be found at the side of a GAA pitch where he supports his three children. In business, though, he’s not short of challenges given the scale of the Devenish operation and the fact it trades in more than 40 countries.

What vision/ lightbulb moment prompted you to start up in business?

There was no lightbulb moment as such, it simply felt instinctive. Being from an entrepreneurial family I assumed I would go into business once leaving college, so it was a natural progression for me. Also, being from the west of Ireland we always have to be innovative and entrepreneurial to do business, and attract people to the west to spend their hard-earned cash.

In 2006 I questioned whether this was the business, or life, for me, and I stepped away from it for a short while. It was only then that I truly recognised that Devenish and its people had something very special. There is a unique entrepreneurial, enthusiastic and collaborative culture, and that’s what makes it worth fighting for.

What were the best and worst pieces of advice you received when starting out?

The best advice I received was “you don’t always get what you pay for, but you always pay for what you get”. That is a valuable lesson, worth learning at an early stage.

I find it hard to think of the worst piece of advice as whether you choose to heed it or not there is always some merit in learning from other people’s insights even if you disagree.

We’ve maintained sustainable growth throughout both the economic upturn and downturn. We diversify our offer across the globe, continually exploring other markets to mitigate risk and ensure that we do not become dependent on one sector or one market.

I would remind it that we are all in this together, and we should pro-actively engage to understand the barriers to trade. Let’s challenge one another – pro-actively and positively – to drive business forward and build the economy.

What is the most common mistake you see entrepreneurs make, and what is the single most important piece of advice you would offer to a less experienced entrepreneur?

Not developing a revenue stream. Ideas are great, but money is what keeps them alive. Get a return on your entrepreneurial spirit – and don’t be afraid to ask for one.

I have a responsibility to the people of Devenish. They have huge enthusiasm, ability and an appetite to succeed. It is my duty to provide the environment to allow all of us in Devenish to fulfil our potential.