‘I had a choice: get another job or start a company’ 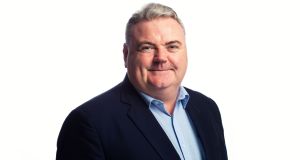 John Mullins: ‘Governments can either support renewables and make the required changes or continue to resist’

Nearing the end of his contract as chief executive of Bord Gáis, John Mullins had a choice to make: start a new company or get another job. He chose the former and in 2013 established Amarenco Solar – a developer, constructor, financier and manager of solar photovoltaic technologies.

Since then, the company has grown to a level whereby it is fast approaching €100 million in turnover, employing 90 staff globally. In its short lifetime, Amarenco has invested more than €400 million with its partners in large solar farms. In France, it is now the number one provider of solar rooftop solutions.

In Ireland, Amarenco expects to invest up to €200 million over the next three years and, while it has a number of shovel-ready projects, it is waiting for the Government to make a decision on new renewable tariffs.

These form a small part of Mullins’s lofty ambitions for Amarenco, a company he expects can have a turnover of €250 million by the end of 2023 with more than 1,000 megawatts under management.

For a company that started with four people, a loan note and a small office, this is no small feat.

Our first plant. We had to raise €5.3 million in the Irish retail market for a 12-megawatt plant in the south of France. We then did two more and then two more and we now have completed nearly 30 such deals.

We sought to raise institutional funds in London in 2013, and failed miserably as we had no specific deal background as a new company. We went back to the drawing board and cold-called over 300 pension brokers across the country to see if they would be interested in getting their clients to invest in our first plant. There was no salary for a very significant period!

There have been many game-changers: the introduction of key shareholders to the company, and partnerships with Macquarie, Total and Infracapital.

What are the big disruptive forces in your industry?

Governments are the big disruptive force – they can either support renewables and make the required changes or continue to resist. The other disruptive force is the price of solar panels – as they come down, solar PV becomes more attractive and viable.

What is the most common mistake you see entrepreneurs make and what advice you would offer to a less-experienced entrepreneur?

Entrepreneurs underestimate the time it takes to get a deal done and consequently can end up with cash flow problems.

All of our business currently is international bar our developments that are ready to build in Ireland.

The inherent success of growing a business every day with new projects.

I was coming to the end of my contract as chief executive of Bord Gáis and had a choice: get another job or start a company. In starting a company, I looked to the solar market as solar PV technology prices were decreasing rapidly and were becoming relevant in a European investment context.

1 Tick all the right boxes when it comes to your house insurance
2 Should I switch bank now with Ulster Bank at risk of closing?
3 Aldi and Lidl at back of queue during UK pandemic
4 Belfast mailbox address used by account holder in Russian money-laundering scheme
5 EU watchdog calls for end to Covid loan payment breaks
6 Will brother’s widow get half of our parents’ estate when they die?
7 Finance Ireland refinances mortgages with low level of payment breaks
8 ‘I have three children and a dog, so I feel like a bit of a human ATM’
9 Isme to support legal action against pension tax relief limit
10 Swiss drug giant Roche pays €380m for Irish biotech Inflazome
Real news has value SUBSCRIBE