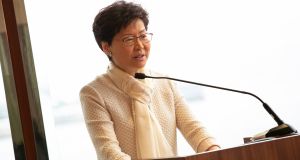 Chief executive of Hong Kong Carrie Lam: ‘Suddenly in the middle of last year we had this trade war and all the figures came down’. Photograph: Richie Stokes

Hong Kong’s political leader Carrie Lam told Irish business leaders on Monday she is “worried” about the short-term impact of the US-China trade war on the territory’s economy but predicted that strong growth would return in the long term as it pivots towards trading more heavily with other Asian countries.

In a speech to a large group of visiting Irish business leaders as part of the EY Entrepreneur of the Year Awards chief executive retreat, Ms Lam said that “2018 was supposed to be a very good year for Hong Kong. We made 3.8 per cent GDP growth in 2017 and the first quarter of 2018 we made 4.7 per cent growth.

“Then suddenly in the middle of last year we had this trade war and all the figures came down. The first quarter [of 2019] was a mere 0.6 per cent. There is a lot of trade between the US and China routed through Hong Kong.”

She said the 25 per cent tariffs applied by the US on a wide range of goods had made it difficult for many local companies to make a profit and it had also affected business confidence.

However, for the medium to long term, Ms Lam said she was “less worried” as Hong Kong diversifies its economy.

“In the last three years we have identified south Asia as a region where we should open up more markets, partly to diversify our economy and partly to help businesses to spread their risks.”

Ms Lam, who holds the title of chief executive of Hong Kong, said the free trade agreement negotiated over the past two years with the 10 members of the Association of Southeast Asian Nations (Asean) would take effect this year.

Ms Lam noted how bilateral trade with Ireland last year amounted to $1.4 billion (€1.25 billion )worth, representing growth of 34 per cent.

“In the past five years, the annualised growth comes in at just under 7 per cent,” she said, adding that about $900 million of merchandised trade between Ireland and China was routed through Hong Kong last year.

Ms Lam told the Irish entrepreneurs that Hong Kong offers a “business-friendly environment with a low- and simple-tax regime” for expatriates seeking to start a business there.

“Hong Kong has signed some 250 binding bilateral trade agreements with 17 nations . . . covering everything from investment, promotion and protection to air services, avoidance of double taxation and legal matters,” she said.

Some 2,600 start-ups had been created in Hong Kong in the past few years, with about one-third of them founded by foreign nationals, she added. “Our start-up community is highly international. I invite Irish companies of every size to join us here in Hong Kong.”

Hong Kong was a British territory until 1997 when it was handed over to China. It operates as an autonomous territory of China.