From Thurles to New York: Louise Kennedy has designs on US 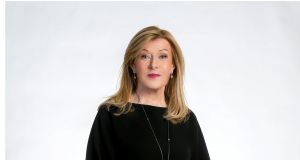 Louise Kennedy: “I remind myself each season that we can never rest on last season’s laurels.”

The middle of five children, Louise Kennedy caught the fashion bug from her parents who ran a general drapery store in Thurles, Co Tipperary. Kennedy knew she wanted to establish her own brand and that ambition was fast-tracked when Brown Thomas bought her entire graduate collection.

Since establishing her brand in 1983, Kennedy has built an international reputation with a presence in London and New York.

Irish travellers will also be familiar with her designs as in 1998, Kennedy designed the current uniform for Aer Lingus. She was this year reappointed to design its new uniform.

Kennedy has also designed for Irish presidents Mary Robinson and Mary McAleese as well as members of the British, European and middle eastern royal families.

She has picked up a raft of awards for her work, including Irish designer of the year and Veuve Clicquot business woman of the year, and has been conferred with an honorary doctorate from the Dublin Institute of Technology.

Kennedy is now setting her sights on further growing the business and, in particular, her US and middle eastern presence. In three years’ time, she plans to have lifted total sales by 30 per cent and, from her Merrion Square base, further develop her brand’s global reach.

In the fashion industry, the fact that we have survived three recessions over 35 years and consistently grown our business year on year. Our achievements have been marked by numerous awards over the years, but I remind myself each season that we can never rest on last season’s laurels. Each day and season brings new challenges.

The first I remember was when our principal manufacturer in Ireland closed its doors forever and we had to quickly find new partners to work with in Europe. Now our entire production has moved to Italy and Portugal.

Another was the year our entire 175-piece sample collection was stolen en route to London Fashion Week. We had already made a significant investment in securing our stand at LFW so it was heart-breaking to have to cancel all our buyer appointments. The story made national news both here and in the UK, which brought a lot of attention to our brand so I suppose every cloud has a silver lining.

Opening our London store in Belgravia in 2000 was without doubt a game-changer. Almost overnight, this move brought our brand to the attention of not just a UK customer base but opened the doors to the middle east and Asia.

What was the best piece of advice you received when starting out?

The best was never to compromise or dilute your product offering when the target customer is the luxury consumer; this segment typically survives recessionary times so I was frequently reminded to hold my nerve especially when the last recession hit in 2008.

In 2011, I opened a large account with an independent retailer in Canada with very favourable credit terms as he came to us through a mutual industry friend. Unfortunately, his business did not survive, and I was left behind in a queue of creditors.

My family foremost, as it was my father who encouraged and provided supports for my business originally. I work closely with my sister Caroline who is also a director of my business. She owns her own PR agency and most of her clients are in the luxury goods sector, so she understands my business inside out. My brother Christopher carefully controls all distribution and logistics.