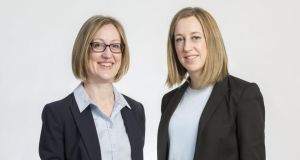 Áine Lecky and Éibhlin Murphy of Major Equipment International, which employs 100 people and has a turnover of €15 million.

Áine Lecky and Éibhlin Murphy learned their respective trades elsewhere before returning to the family business in the mid-Noughties.

The sisters, now directors of Major Equipment International, which was established in 1976, live in Ballyhaunis, Co Mayo, where they run the business, which designs and manufactures, as it says on the tin, major equipment.

While the company’s manufacturing facility remains in Ballyhaunis, this is a global business with distribution depots in Britain and the Netherlands.

Their product range includes grass mowers and custom-designed slurry tankers for agricultural applications. Clients include the Port of Tyne in Newcastle, Blenheim Palace (the former home of Winston Churchill), and the city of Boroondara in Australia.

The company employs 100 people and has a turnover of €15 million, with export sales accounting for 60 per cent of that. Major Equipment’s products can be found in Germany, Belgium, Italy, South Africa, Chile and the United Arab Emirates among other locations. The company is firmly in expansion mode, having just signed with a dealer in Canada.

What vision/light bulb moment prompted you to start-up in business?

The business was founded in 1976 by our father, John Murphy, and his brother Mark Murphy. Following Ireland’s accession to the then EEC there was a shortage of robust agricultural machinery capable of withstanding the severe Irish conditions, so they set about designing and manufacturing their own range of grass toppers and slurry tankers.

Coming through the recession while paying off a large financial commitment. We have managed to grow the company through a combination of new products and new markets.

In 2008-2009, the bottom fell out of our market and we experienced a 40 per cent drop in turnover. Staff numbers, wages, overheads and inventory levels were all managed tightly. Difficult decisions were made in relation to making valued staff members redundant. We invested heavily in R&D, focusing on developing a product range which was suitable for the export market.

In the past, the biggest mistake was extending credit to one large customer in the UK. He went into receivership and brought Major down too. But from every mistake, lessons are learned. The company restarted and we’ve rarely had a bad debt since.

As a company, we think there should be an increased focus on apprenticeship schemes. We currently have eight people on a scheme and it’s working really well. But there is still a huge skills shortage in our sector and we see this as one of the biggest challenges we face.

Our father. His passion and dedication to designing superior agricultural and amenity machinery is unwavering. He instilled in us a work ethic that helped us navigate through the recession. We are privileged to be given the opportunity to further grow our company. Anna May McHugh from the NPA [National Ploughing Association] is someone we both admire for her contribution to the Irish agricultural industry.

What keeps you awake at night (if anything)?

Because we operate in the southern hemisphere, there are times where there is work to do late at night. We use a project-management app called Asana, for anything that pops into our heads late at night, so it’s not keeping anyone awake.