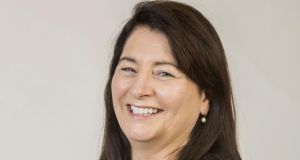 Carrick Therapeutics founder Elaine Sullivan: “The best piece of advice I received was not to be afraid of trying things.”

It was Dr Elaine Sullivan’s father who prompted her to start up in business after he was diagnosed as having an aggressive stomach cancer and was told he had only a short time left to live. Having being offered a new therapy, he lived for another three years after his diagnosis and, with that inspiration, Sullivan ultimately founded Carrick Therapeutics in 2016.

On its launch, the company had $95 million in funding from a syndicate of investors and gathered a “hugely experienced” research and development team.

Sullivan herself has significant experience in the industry, having previously held roles as vice-president of global external research and development at Eli Lilly and vice-president of R&D for new opportunities at AstraZeneca.

With teams in Dublin and Oxford, the biotechnology company focuses on transformative oncology medicines, and collaborates with world-class scientists from institutions including Cambridge University, Imperial College London and Oxford University.

In November 2017, Carrick announced that the first patient had been dosed in the phase-one clinical programme of CT7001, a cancer treatment which was found to be effective in the in pre-clinical models of breast cancer, acute myeloid leukaemia and small-cell lung cancer. It was a significant achievement for Carrick to take a pre-clinical candidate to first patient dosed in less than two years.

The best piece of advice I received was not to be afraid of trying things. I can’t actually recall a time I was given really bad advice – probably because it was quickly forgotten!

Carrick’s aim is to become Europe’s leading biotech oncology company, building a business with a strong foundation that we can scale. We’ve had enormous support from the scientific community both in Europe and the US, which has been exceptional.

We have seen an increasing number of high-quality new companies created in recent years, which is encouraging and means there are lots of potential partners to collaborate with.

Not focussing on execution. Laying the foundations for a business is one thing, but then you have to follow through. There are only so many hours you can work in a day and these need to count if you are to be successful. You have to seize your opportunities.

I was incredibly fortunate to do my PhD with the late Professor Ken Murray, who was one of the founders of Biogen Idec. During that time, he instilled in me a great belief that everything is possible. He was one of the most inspirational people I’ve met. To him, life was always about great science. He was a mentor throughout my life.

How do you switch off from work? What are your hobbies?

I enjoy spending time with my husband and three children, as well as walking the dogs – a border terrier and a Welsh springer.