Business booming for Limerick firm amid hive of construction activity 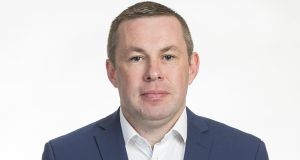 Having joined H&MV Engineering in 1998 as the company’s first electrical apprentice, PJ Flanagan clearly made an impression, quickly becoming a driving force at the company and ultimately rising through the ranks to become chief executive.

H&MV is a specialist high-voltage energy company that has grown to have an active presence in the UK, Europe, Asia and South Africa. Since Flanagan and his fellow director John Stokes engaged in a management buyout in 2015, the company has grown its turnover from €7 million to €34 million. Its employee numbers have increased from 70 to 170 with Flanagan intending to double is headcount in the next three years.

Flanagan has encountered his fair share of skill shortages and, as a result, focuses heavily on training. The company now has its own training centre and its workforce includes 60 apprentices at various stages of their courses.

Headquartered in Limerick and with another office in the east to serve the Dublin region, H&MV is well placed to capitalise on the hive of construction activity planned for the Republic in the coming years.

Flanagan says his greatest achievement is witnessing the company’s expansion into new markets. While that part of the business currently accounts for 20 per cent of revenues, his plan is to grow that to 50 per cent.

It was an organic process for me. I have always been passionate about H&MV and committed to its growth and success. When the opportunity arose to lead the company, I grabbed it with both hands and haven’t looked back.

As our business has gone through a period of considerable growth in recent years, we were required to expand our team accordingly. The challenge was to match the level of energy, commitment and expertise that already existed within the company. Luckily, we were able to source new team members that were a strong fit for the H&MV ethos. Ireland possesses excellent emerging talent in our field.

Three years from now, we aim to have successful stand-alone operations in our current international regions. We also aim to be well established in three new territories.

How are international political developments such as Donald Trump’s presidency and tax reform, along with Brexit, impacting on your business?

The US tax reform has had little impact on our business to date. I view Brexit as a considerable opportunity for us in the UK. Because of the current levels of uncertainty surrounding Brexit, we are seeing substantial gains if you are willing to take risk and have confidence in the market.

Not putting correct management teams in place. It is important to learn how to delegate to your management team in order to free up your time to lead the company.

We envisage considerable growth both at a national level and overseas. This will be largely dictated by the current demand on the renewables and data centre sector. We also see the electrification of our transport systems which will require massive grid strengthening.