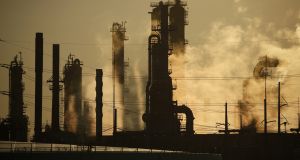 Dublin-based United Oil and Gas said its main asset in Egypt continued to perform strongly in the final part of 2020.

The company has a 22 per cent interest in the site.

“The Abu Sennan asset continues to perform strongly. With the ASH gas pipeline coming onstream at the end of the year, 2021 has already seen a boost to production, with circa 220 boepd of additional gas now being captured on a net basis,” United’s chief operating officer Jonathan Leather said.

“United are looking forward to further potential production additions from Abu Sennan in 2021, with a number of activities planned,” he said.

“Drilling at ASH-3, the first of a multi-well programme, is currently underway, with results from this well due in Q1,” Mr Leather added.

The company was established five years ago by Irishman Brian Larkin, who previously held finance and commercial positions at Tullow Oil. He was subsequently joined by Briton Jonathan Leather, who worked with Tullow between 2007 and 2015 where his roles included membership of its global exploration leadership team.