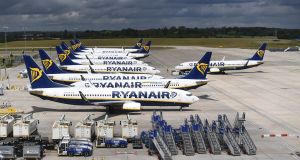 The deal aims to avoid redundancies by cutting pay by up to 10 per cent, but restoring wages over the agreement’s life. Photograph: EPA

Ryanair’s Irish-based cabin crew is voting on a temporary 10 per cent pay cut to save jobs as the airline combats ongoing fallout from Covid-19 travel bans.

Trade union Fórsa has negotiated a deal with Ryanair covering pay and other conditions for the airline’s 700 directly and agency-employed cabin crew on which they will vote over the next week.

The deal aims to avoid redundancies by cutting pay by up to 10 per cent, but restoring wages over the agreement’s life, which runs from the first of this month to July 1st, 2024.

It also provides for rostering changes, part-time working, unpaid leave and maximising use of the Government’s Covid-19 wage supports while they remain available.

A document circulated to Fórsa members states that Ryanair can deal with surplus Irish crew without redundancies, based on the cost cuts and other changes, along with not renewing fixed-term contracts and the airline’s own estimates of the number likely to leave the company of their own accord.

“In the event of a resurgence of Covid-19, or other event leading to a reduction in aircraft allocations at Irish bases, the parties will engage to make all possible efforts to address any resulting cabin crew surplus, with recourse to redundancies only as a last resort,” it adds.

Ryanair has said it may have to cut up to 3,000 jobs and temporarily reduce pay by 20 per cent across its entire operation, which embraces more than 80 bases across Europe, as a result of the coronavirus pandemic’s impact on air travel.

As the airline’s Irish operations gradually return to full schedules, Ryanair will pay crew proportionately for days worked at the reduced rates. There will be no pay increase claims between July 1st this year and June 30th, 2024.

Junior grades will have their basic pay rates cut by €550 a year with restoration staged over the same period.

Ryanair will axe its €1,800 a year productivity bonus, already due to expire in March 2021, with no payments made under this discretionary scheme.

Rather than reinstate this, the airline will replace this with two €900 a year increases in basic pay in 2023 and 2024.

Other changes will require reduced rosters over the winter months with provisions for part-time working, job sharing and other arrangements, tied to aircraft numbers and flying activity.

The document states that this element will be key to minimising job losses. Ryanair and Fórsa will agree specific arrangements covering this.

The airline will also consider requests from crew wishing to take on extra work outside Ryanair, and will not reasonably refuse permission once the second jobs do not create a conflict of interest or affect workers’ ability to operate within EU aviation safety rules.

Staff are due to finish voting on the terms on Thursday, July 9th. The deal is also subject to Ryanair board approval.

The company will also commit to continuing talks with Fórsa on an overall collective labour agreement covering annual leave, base transfers and transitions for agency staff.

If the deal is passed, the sides have agreed to review the deal during March 2023.

The document states that the Covid-19 crisis will have a profoundly negative impact on Ryanair’s business and workers.

It adds that the company and Fórsa have prioritised saving as many jobs as possible while recognising the need for significant cost cuts in the new environment.