Public support must be won if renewable energy goals to be realised, conference hears

Eirgrid chief says: ‘It’s up to us to convince the nation this vision that we collectively have is the right one’ 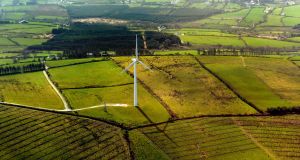 Ireland has the potential to deliver a world-class power system by 2030 with an electricity grid capable of operating with close to 100 per cent renewable energy, but it has to convince people of the benefits first, Eirgrid’s chief executive has said. File photograh: David Sleator/The Irish Times.

Ireland has the potential to deliver a world-class power system by 2030 with an electricity grid capable of operating with close to 100 per cent renewable energy, but it has to convince people of the benefits first, Eirgrid’s chief executive has said.

Mark Foley told the annual conference of the Irish Wind Energy Association that the defining challenge of the decade for the sector was to sell their collective vision to ordinary people.

As providers of grid infrastructure, he said Eirgrid and the ESB were working together to provide “world class solutions quickly and at the lowest cost”.

This would also require transforming their approach to public engagement, he added, and there was a need to recognise the fundamental importance of winning hearts and minds.

Mr Foley said an effort was needed to help members of the public understand the benefits of this renewable energy vision “in a real and tangible manner”.

He said this communications challenge could be won or it could start to unravel and become problematic “as we are currently seeing [with the pandemic], as complacency and, arguably, an element of subversion has crept into public discourse”.

“It’s up to us to convince the nation this vision that we collectively have is the right one, and it’s one that will transform business, it will transform society and allow us as a nation to hold our head high in the world, in terms of our contribution to the battle against climate change.”

Minister for Climate Action Eamon Ryan said Ireland’s national energy and climate plan submitted to Brussels in July amounted to a doubling of Ireland’s climate ambition that would “move the country from behind the pack towards being a leader”.

Mr Ryan said the EU through its green deal, Covid-19 recovery plan and enhanced ambition on reducing emissions by more than 55 per cent by 2030 had set a clear framework backed by legislation that would provide certainty for the renewable energy sector.

He said that would be matched by Ireland and backed by a revised Climate Action Bill; three five-yearly carbon budgets; and a climate advisory council with strengthened powers. Critically, this was not politically divisive, he noted.

While Mr Ryan believed Ireland would be good at decarbonisation, especially in the rolling out of wind energy, there was a need to address planning problems, especially in providing greater certainty around timelines.

New wind energy guidelines needed to be in place by the end of this year, he said. “It’s time to settle them and move on, for communities and the renewable wind sector.”

The Green Party leader said grid constraints needed to be addressed and that a Marine Planning Development Bill was a critical enabling piece of legislation for offshore wind development, which would be in place early next year.

“It has set a great example for the rest of Europe, ” she said, adding that the EU would help expand the sector, especially offshore, where there was greater untapped energy.