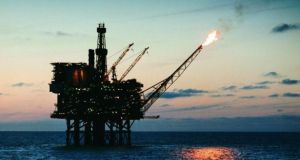 Shares in Oisín Fanning’s San Leon Energy closed on Friday in London at 55.25p each, having declined by 0.45 per cent during the session

Former stockbroker and telecoms entrepreneur Oisín Fanning’s San Leon Energy may be the target of a potential takeover battle. The London-listed oil and gas explorer is understood to have received an approach from a second Chinese suitor.

San Leon Energy said just before Christmas it had received an 80p-per-share indicative bid from a little-known Chinese company called Geron Energy Investor, which would value the company at £360 million (€422.3 million) – almost double its market capitalisation at the time.

Sources said that San Leon Energy and its advisers have now had to widen the process, after receiving another approach for the company, which last year completed a transformational acquisition of an indirect interest in a Nigerian offshore oil field. The sources declined to name the other party involved, although it is also understood to be based in China.

San Leon Energy’s largest shareholder, UK hedge fund Toscafund, which is run by Martin Hughes, dubbed “the Rottweiler” in the City of London for his sometimes aggressive investment style, called on the company in December to engage in discussions with Geron with a view to a transaction being agreed.

Toscafund has since increased its stake marginally in San Leon Energy, from 55.97 per cent to 56.2 per cent this week, presumably in the hope of a deal being executed at a premium to where shares are currently trading. The main shareholder is not privy to the discussions.

Shares in San Leon Energy closed on Friday in London at 55.25p each, having declined by 0.45 per cent during the session.

A spokeswoman for San Leon Energy declined to comment, while representatives at Toscafund didn’t respond to requests for comment.

San Leon Energy sold £170.3 million (€199.7 million) of shares at 45p each in September to acquire a 9.72 per cent interest in the world-class OML 18 oil field in Nigeria, which is currently producing 54,000 barrels of oil per day and 55 million standard cubic feet of gas per day.

The Irish company plans to return half of free cash flow from its Nigerian investment to shareholders via share buybacks or dividends over five years.

Crude oil prices have rallied by 84 per cent over the past 12 months to $56.70, helped by members of the Organisation of Petroleum Exporting Nations (Opec), led by Saudi Arabia, reaching an agreement for the first time in a decade and a half with non-Opec members, including Russia, to cut global oil supply. However, the price of oil is still well off an all-time high of $115, reached in June 2014.