Emergency meeting of Opec and other oil producer nations sought 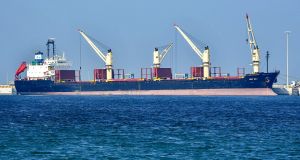 Brent crude rallied more than 30 per cent on rising hopes of a supply deal among major oil producers, led by Saudi Arabia and Russia, to alleviate a price collapse triggered by the coronavirus outbreak.

US President Donald Trump on Thursday said on Twitter that he had spoken with the crown prince of Saudi Arabia, Mohammed bin Salman, who in turn had spoken with Russian president Vladimir Putin.

“I expect & hope that they will be cutting back approximately 10 Million Barrels, and maybe substantially more which, if it happens, will be GREAT for the oil & gas industry!” he said.

On Wednesday Mr Trump said he believed a deal to end a price war – which has taken Brent to the lowest level since 2002 – would be made in a “few days”.

Riyadh had pushed for a deal to deepen and prolong production curbs ahead of a March meeting of oil ministers, but it was met with reluctance from Moscow. This prompted Saudi Arabia to pursue a “pump at will” strategy to shock the market, dramatically cutting prices for its crude and raising production to record levels.

“I think that they will work it out over the next few days . . . Both know what they have to do,” Mr Trump told a White House press conference on Wednesday, without giving any further details.

Saudi Arabia’s state news agency said the kingdom was calling for an emergency meeting of Opec and other oil producer nations, including Russia, to reach a “fair” supply deal.

However, the Kremlin rejected Mr Trump’s remarks. Talks with Saudi Arabia “have not begun” and “are not planned”, Dmitry Peskov, spokesman for Russian president Vladimir Putin, told reporters earlier on Thursday.

“So far, no one has started talking about any specific or even abstract deals in exchange for Opec+,” he said, adding that “no one is happy with this [Oil market] situation”.

After Mr Trump’s tweet, which appeared to be an attempt to corner Russia into agreeing to resume talks with the Kingdom, Mr Peskov told the FT: “there was no conversation” between Mr Putin and Prince Mohammed.

The US has put pressure on Saudi Arabia to scale back its supply surge, which has contributed to a price collapse and ricocheted across the shale industry where lots of companies are on the brink of bankruptcy. Mr Trump said he would meet US oil executives to discuss aid measures.

Brent crude, the international oil benchmark, rose as much as $36.29 a barrel after Mr Trump’s tweet, before retreating soon after to $29.40 a barrel - an 18 per cent increase.

While Saudi Arabia and Russia have said they back joint efforts, there is little sign of a strategy shift yet. The kingdom raised production to above 12m barrels a day, its maximum level, on Wednesday.

Russia’s energy minister Alexander Novak said on Thursday he did not “exclude the option of negotiations” with Saudi Arabia, but that the collapse in demand caused by the coronavirus pandemic meant that cuts to supply would not necessarily prevent further falls in the oil price.

Saudi Arabia is hiring oil tankers to carry its crude into the global market and has told the state energy company to prepare for a prolonged fight. Saudi Aramco has informed oilfield services contractors to be ready to provide support as it seeks to keep production at heightened levels.

People close to the kingdom say the world’s biggest oil exporter still wants a deal, even though a multiyear oil alliance between Saudi Arabia and Russia coming to an end last month. But any production curbs would need to be shared between all producers, including Russia.

“The political hurdles to any supply deal are as large as the balance problem itself,” said analysts at JBC Energy.

Some market analysts have said the demand collapse is so severe, because of global lockdowns and travel bans, that any supply cuts from major producers would have a limited impact.

The global oil industry is facing its biggest consumption hit in history as the coronavirus pandemic forces people stop using cars and planes, with traders forecasting crude demand could fall as much as 25 per cent next month. Global storage tanks are filling up fast and refiners are turning away additional barrels as demand for refined products - from petrol to jet fuel - takes a hit. – Copyright The Financial Times Limited 2020