Joint venture at Sliabh Bawn in Roscommon to generate enough power for 40,000 homes 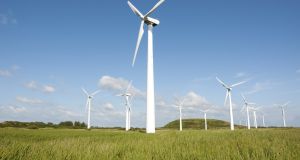 The scheme in the Doughill Forest area, near Strokestown was conceived by Coillte and the tail end of the boom and it had obtained planning permission as the sole developer in 2012

Coillte and Bord na Móna have agreed a joint venture to build out a €90 million wind farm in Co Roscommon.

The two semi-State companies are also understood to have struck a funding deal with Bank of Ireland and Ulster Bank to finish the project, which comprises 20 turbines at Sliabh Bawn in Roscommon that will produce enough power for 40,000 homes.

The scheme was originally conceived by Coillte and the tail end of the boom and it had obtained planning permission as the sole developer in 2012. The project is being developed on lands owned by the State forestry company.

It will be located within the Doughill Forest area, near Strokestown. The forest comprises 1,200 hectares and lies adjacent to a Bord na Móna bog.

As part of the deal, a fund of close to €90,000 a year for the expected 25-year lifetime of the project is being made available to local community groups.

The developers will also commit to developing a range of recreational and tourist facilities on the site. These will include equestrian, walking trails and picnic areas.

Coillte and Bord na Móna have both diversified heavily into the green energy space in recent years. The two companies agreed with the Government in 2014 that they would co-operate on renewable energy projects, after the abandonment of a plan touted by ministers to merge them.

Sliabh Bawn is the third wind farm joint venture to be agreed by Coillte in the past year, following similar deals with the ESB at a site in Wicklow and also with energy company SSE for a scheme in Galway.

Coillte intends to develop enough wind farms to power more than 200,000 homes in coming years, as the company aims to maximise its land holdings, the most extensive in the State.

Bord na Móna, meanwhile, was a pioneer of wind energy in this country, building the first commercial wind farm in Ireland in the early 1990s in Mayo.

It has also recently developed other wind farm projects including a major scheme at Mount Lucas in Offaly, while it is working on schemes at Derryadd in Longford and Cloncreen in Offaly.